High school swimmer comes out after questions about prom date

Chris Cassingham is a swimmer and graduating senior at Plano West Senior High School in Plano, Texas. He has only come out to a handful of people but wanted to share his story here.

Share All sharing options for: High school swimmer comes out after questions about prom date

My sister was the first person to know.

"Sooo have you been friends for all that time?" She asked in a series of text messages about my prom date last month. "I've never heard of her!"

"We became really good friends this year," I replied, already knowing where this conversation was going.

"We just got to know each other better over the years. And not like that."

After a long pause, I said: "Can you seriously not tell?"

Friestad grew up in Plano, Texas, and was fully supported by his high school team. He had to come out again at Div. 1 New Jersey Institute of Technology, and he was embraced.

When Dafforn came out to his Boilermakers team his senior year, they were only mad he hadn't come out sooner.

I first knew I was different around seventh grade when I realized I was more interested in choir and swimming. While most of the boys at school were talking about joining the football team I was lost in a sea of unshared interests.

I also realized that I was different because all I could think about was boys. I knew I was supposed to like girls but I just couldn't muster any sort of romantic interest in them (at least as romantic as a seventh grade mind can get). As the years went by, I suppressed my feelings about boys through a mixture of swimming, schoolwork and plain old determination to like girls. None of it worked.

In addition to trying to understand my confusing feelings, I focused on being the best swimmer I could possibly be. In swimming you are constantly and intimately surrounded by your teammates. Half-naked (OK, three-quarters naked).

I've been on the club swimming scene since I was seven years old and I can honestly say it has taught me more about being mentally tough than anything else in my life. If there is ever a set you don't think you can finish, or an interval you think you can't swim fast enough to make, all you have to do is look at the lane next to you and see that someone else is doing it. The competitive spirit of club swimming, both in practice and at meets, is infectious, and it has inspired me to be both physically and mentally tenacious.

However, I quit club swimming just a few months into my sophomore year in high school. In hindsight, I think it was because I was struggling with my sexuality, though I told myself and everyone else at the time that it was because I couldn't keep up my grades and also swim nearly 20 hours per week.

I stuck with high school swimming but have regretted my decision to quit club ever since. I think about what I could have accomplished in the time I lost, where I could be, which colleges could have recruited me. It isn't fun to think about, though I have learned from it. Now I'm back on a new club team and loving every minute of it (except for the mornings when I can hardly move). Even more exciting are my college swimming prospects. I am so thrilled to have been recruited to swim for the University of Mary Washington, a Div. III school in Fredricksburg, Va., in the fall. I look forward to my next four years as an Eagle and a collegiate athlete. 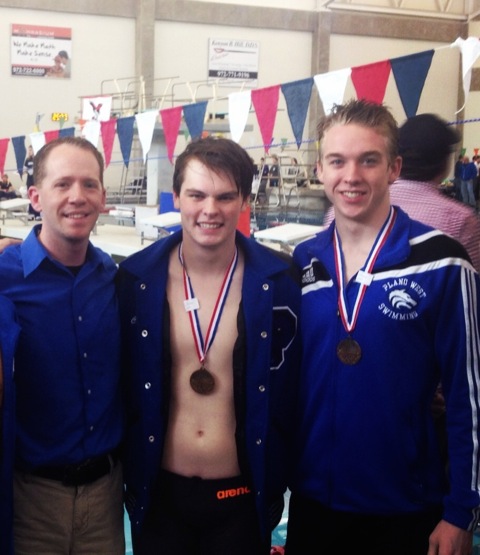 Cassingham (center) with his high school coach and a teammate.

Reading Outsports has inspired me to come out. Knowing that there are other people out there, real people, who are experiencing a similar situation to mine is enormously encouraging. The fact that a lot of them are also swimmers is nice to see as well. It let me know that I wasn't alone and that there was someone out there who was also struggling to fit into a world that wasn't exactly made for them, a world that often doesn't fully accept our differences.

Had I not discovered these stories of other gay athletes, I wouldn't be sitting here telling everyone my story. I would have continued hiding the truth. For how long I don't know and frankly, I am relieved I don't have to find out.

"What? Are you gay?" my sister eventually replied to my text message.

"Yes. And this isn't at all how I wanted you to find out," I typed, a little frustrated.

It really wasn't how I envisioned my coming out. Though it was a far less emotionally stressful way of doing it, and I am happy to have made this first step.

Soon I was out to my future UMW roommate, Anthony, who has been, and I'm sure will be, very supportive of me (even though we haven't even met yet!). I came out to a couple other close friends, including my best friend in the entire world, Annie.

She came over to my house later that day. She told me that someone had told her about an online dating profile I had made. I said "so that means you know I'm gay now". Seconds later, we were back to planning our graduation party like nothing had happened.

Last week I came out to my mom. She was getting ready for work, and as I sat on her bed chatting with her and petting our two dogs, I knew that I had to tell her now. I waited for a break in conversation to go into her office and take a notepad on her desk and write the words "I'm gay" on the first page in large letters. My mom was drying her hair in the bathroom by then. I handed her the notepad. She grabbed it and looked surprised. She kind of squinted and tilted her head back and to the side.

A look of calm relief appeared on her face. She hugged me and told me that she loved me.

I am telling my story because I know that shared experiences are some of the most powerful things on earth. By reading other people's stories I knew that I would eventually have the courage to come out myself.

It may seem like there are lots of coming out stories on the Internet, and there are. But there are also a lot of people who don't yet have the courage to embrace who they are. If my story can help give someone that final boost of assurance that everything will be all right, then telling that story is the very least I can do.

Knowing who you are is the most important thing in life. I am still working on being "out." People who have spent years hiding something about them will know there isn't a switch you can automatically hit that will wipe away your natural reflexes to deny your sexuality. It is a process that takes time and commitment. But it will be worth it in the end.

To those still struggling with their sexuality, just know that even though coming out may seem an impossible task, hiding is even harder. Embrace yourself and know that there will always be someone to support you. No matter what.

You can find Chris Cassingham on Twitter @CCassingham or via email at chriscassing@mac.com. If you're an LGBT athlete, coach or sports administrator and would like to tell your story, contact Outsports at outsports@gmail.com. For the world's largest network of LGBT high school and college athletes, visit GO! Athletes.