In the week after the WNBA released its Pride T-shirts, the items led all NBA merchandise in sales. Over the last month the shirts have continued to lead all WNBA sales.

Share All sharing options for: WNBA Pride shirts led sales for all NBA merchandise in its first week

The WNBA's Pride program will culminate in a televised game between the Tulsa Shock and Chicago Sky on June 22.

The WNBA's Pride T-shirt, released a month ago, was the best-selling item across all NBA platforms the week it was released, Outsports has learned from WNBA spokesperson Dina Skokos.

While the WNBA and NBA will not release specific sales numbers, the best-selling tee topped sales for jerseys of every NBA player in the final week of May. That includes the jerseys of superstars still in the NBA playoffs at the time, like LeBron James, Kevin Durant and Dwyane Wade, plus WNBA stars just starting their season like Candace Parker and Brittney Griner. The Pride T-shirts have been the best-selling item at the WNBA's online store for the last month.

This continues a powerful trend of the LGBT community embracing sports merchandise reflecting the community and the jerseys of out LGBT athletes. Michael Sam's St. Louis Rams jersey was the No. 2 best-selling jersey among drafted rookiesin the days after the draft. Jason Collins' jerseys sold well when he joined the Brooklyn Nets. Plus, Nike's #BETRUE line has sold incredibly well with some items selling out. 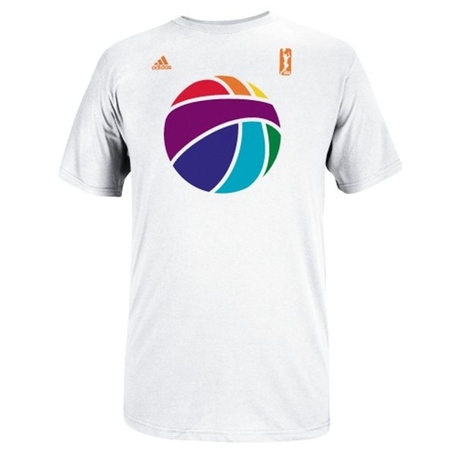