Jack L. Thorne has three state titles, including a state record in the 100m backstroke. Today he came out as gay on Facebook and Twitter, and he shares his story here.

Editor's note: Jack L. Thorne is a junior at Berthoud High School, an hour north of Denver. He swims for Thompson Valley High School, as Berthoud H.S. does not have a swim team. Thorne has two 4A state titles in the 100m backstroke and one state title in the 100m fly, with the Colorado 4A high school record in the 100m backstroke. Thorne posted this message today on Facebook and Twitter. Thorne shares it here in hopes of helping other struggling gay athletes.

Colorado tackles homophobia with You Can Play

Prom pushes gay Texas swimmer out of the closet

Chris Cassingham is a swimmer and graduating senior at Plano West Senior High School in Plano, Texas. He has only come out to a handful of people but wanted to share his story here.

I've spent months trying to figure out how to do this, when to do this and I've realized there's never going to be the perfect time to say what I want to say. But there's no time like the present.

Some of you already know, and for some of you this may come as a surprise. Nothing has changed, I'm still the same Jack, the same Jack you race, the same Jack who you carpool with, the same Jack screaming for you on the side of the pool. This doesn't define me, I'm not gay Jack, I'm just Jack. Being gay happens to be one of many things that make me who I am, it's not what defines me and I won't let it define me.

I've had some people try to discourage me from doing this the way I am. If my close friends and family know, why should I tell the world about it? Unfortunately we live in a world where people are treated differently because they love someone of the same sex, one where kids are bullied and picked on because of this, one where people would rather end their own lives than face this discrimination and hostility. I wish we lived in a world where people didn't have to pretend to be something they're not and where people didn't have to come out at all, but unfortunately we do. My sexual orientation is no more significant than my hair color. It's part of me, but it isn't something that defines who I am.

I want to thank my friends and family who have supported me. I can't stop thanking you guys. You are amazing. The world is changing for the better and I hope I can be part of that change and help break down those stereotypes and misconceptions there are about the LGBT community.

This last portion is for those of you who are struggling. The way you're feeling right now, it isn't always going to be like this. A year ago I was just like you, alone, sad, scared, I was pushing my friends away and I hated this part of me. Now I've come full circle and I'm actually proud of who I am. I've had help and support from some amazing people all the way through this process. Now that I'm here, I want to be able to help someone like those people helped me. You don't have to deal with this alone. If you need advice, or just someone to talk to I'm here.

On that note, I have some very important things to do such as swim, eat and sleep, so I will end this with a thank you to those of you who have taken the time to read this letter.

For the largest network of LGBT high school and college athletes, visit GO! Athletes. For information on Colorado's initiative to end anti-LGBT bias in sports, visit the You Can Play project. 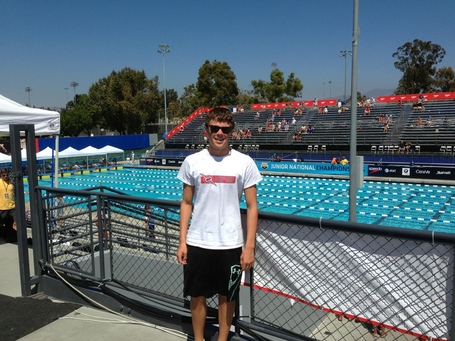