Nike will donate up to $500k to the LGBT Sports Coalition from the sales of their #BETRUE collection.

Niketoday announced the launching of their 2014 #BETRUE collection that celebrates the LGBT community. This is the third year the company has released a #BETRUE line during Gay Pride month. The limited collection is on sale now.

This year the line features three different shoes and a couple rainbow-inspired T-shirt designs. Special shirts have been made to celebrate Pride in Los Angeles, New York, Portland and San Francisco.

The proceeds of the collection's sales up to $500k will go to the LGBT Sports Coalition, a collection of individuals and organizations focused on ending anti-LGBT bias in sports. This commitment further strengthen's Nike's dedication to the work of making sports accessible for everyone regardless of sexual orientation or gender identity. Outsports is one of the three dozen or so members of the Coalition.

From Nike's Web site:The #BETRUE collection features rainbow colors as a reflection of the diversity within sports and Nike's support for the LGBT community. The 2014 collection also continues to build on the #BETRUE print that launched in 2013, with an update to the bold geometric shapes and a unique pattern with the words "Be True" embedded in the print.

"We are a company committed to diversity, inclusion and unleashing human potential," said Tim Hershey, Nike Vice President of Global Merchandising and Executive Chair of Nike's LGBT & Friends Employee Network. "Nike believes if you have a body you are an athlete and we're delighted that #BETRUE is becoming a call-to-action for all athletes to be their most authentic selves."

You can purchase your piece of the powerful #BeTrue collection online or in select Nike stores.

Nike will host the third LGBT Sports Summit next week in Portland, Ore. 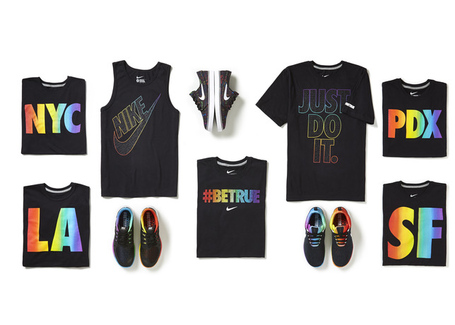