Kiruna IF takes a stand for LGBT inclusion by changing uniforms.

Kiruna IF, a professional hockey team in the Swedish city of the same name, will wear rainbow-colored uniforms next season in a bid to become the nation's first LGBT-certified sports team.

"During the season 2014/2015, Kiruna IF will change their uniforms and make a stand by wearing rainbow-colored jerseys," the club announced in a press release. "In addition to this gesture, the players will give talks in schools, as part of a collaboration with Kiruna Municipality, and participate in events which aim to increase the understanding and acceptance of people's differences and similarities. By setting a good example, Kiruna IF want to prevent bullying and exclusion and create the best opportunities for all young people to play and love hockey."

Kiruna IF is in a league two levels down from Sweden's elite league, Yahoo's Puck Daddy site wrote. Being LGBT-certified means that an organization is "committed to providing a good working environment and respectful treatment from an LGBT perspective."

"Kiruna IF's acceptance project is a laudable initiative that is in line with Swedish hockey's core values, mission and vision. Participation and democracy shall be the defining features in the work to develop our sport," said Tommy Boustedt, Director of Hockey Development with the Swedish Ice Hockey Association and General Manager of the Swedish men’s national ice hockey team.

This is pretty cool and maybe it will catch on in the U.S. Maybe the Dallas Cowboys can take a similar step in the NFL, since Jerry Jones does want them to be America's team. Nothing else seems to be working for them lately.

Here is the new Kiruna IF uniform: 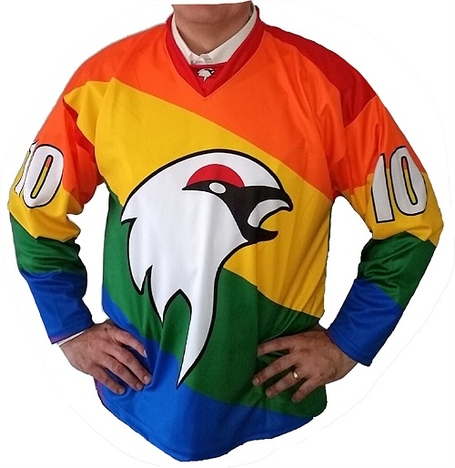