For college soccer goalie, fitting in as only lesbian on team was a struggle

"Although we hear many recent coming out stories, many times we fail to ask what comes after the announcement," Agata Dera writes. Her struggles became a triumph.

Share All sharing options for: For college soccer goalie, fitting in as only lesbian on team was a struggle

Sayers has found acceptance despite the casual homophobia she has heard for years.

For the past four years I dreamed of holding the Landmark Conference champion title in soccer.

Losing in the finals during my freshman year was a heartbreaker, which ultimately became an incredible motivator to bring the title home. My senior year we made to the finals yet again. Since I had never won against Scranton University, I knew I had to leave absolutely everything I had on that field. I was the goalkeeper, so the pressure was incredible. I felt my heartbeat with every second that passed on the clock.

After 110 minutes of the most mentally and physically exhausting game I have played, we moved to penalty shootouts, where we won the championship for the first time in more than 17 years. Following the victory, the conference awarded me with the Most Valuable Player award. Holding the championship plaque I felt an unbelievable sense of accomplishment, not only as an athlete, but most importantly as a gay athlete.

Back on the bus, the celebration continued. With the chants in the background, I put on my headphones and reflected on the victory as well as the journey leading to it. Holding on to my MVP award, I felt a tear coming down my cheek. As much as I have always loved my team, for the first time I felt like I truly belonged. I think that the victory helped me unite with the team, which is what I craved for the last four years.

As connected as I felt to the Drew University women’s soccer team, I always felt different, which had caused a lot of distress. Coming out as a lesbian was an incredibly stressful time for me. Being an athlete meant the world to me and I was afraid that if I was rejected by the team that I gave my heart to, I would lose a big part of my identity. Coming into college I was still struggling with my sexuality, which made coming out as a gay athlete that much more difficult.

The fact that I was the only gay athlete on my team and the lack of support from others made my coming out a time of loneliness and self-doubt.

Since my freshman year I planned my coming out. I did not want a big announcement, but instead wanted to come out to one person at a time. The process was long and exhausting. Some of my teammates were more understanding than others, yet I had not heard positive feedback or words of encouragement that I craved during such vulnerable time of my life.  I experienced a lack of desire from some teammates to share a hotel room, which I had no choice but to take personally. Some coaches failed at ensuring I fit in regardless of my sexuality.

The fact that I was the only gay athlete on my team and the lack of support from others made my coming out a time of loneliness and self-doubt. I questioned my place on the team as I felt my sexuality made me different. I heard several negative slurs throughout my career, but I stayed quiet out of fear of losing a spot on the team I loved so much. I felt that by not speaking up I was protecting my family, but wasn’t the family supposed to protect me?

I discussed my struggles with coaches outside of my sport who kept their doors open to me at all times. Thanks to those individuals as well as the support of my parents, friends and professors, I found the strength to continue my journey despite some setbacks along the way. Until my senior year I decided to stay quiet about my sexuality and focus on my game, but then I shifted my approach. At that point I felt so confident about who I was, I felt that through my visibility as a gay athlete I would inspire others to come out and share their stories. I hoped that by coming out as a lesbian soccer player, I would help my team take a step towards becoming more LGBT-friendly.

One of the most groundbreaking moments for me was after we won the Landmark championship. The whole team gathered to celebrate the victory. I walked into the room holding hands with my date. It was all or nothing for me. I was so proud of who I was and I wanted to invite my teammates into my world. I felt that without sharing such big part of my identity we could never build a strong connection on or off the field. A couple minutes after entering the room one of my teammates ran up to me with a camera and yelled, "How does it feel be to MVP?" after which she said "Uh, is this your girlfriend?" Although it was a small thing, that moment meant so much to me as it represented the freedom I had to be myself around people I cared so much about. Feeling my own heart beating out of my chest, I was free and finally home.

A true estimation of the progress made in the world of sports is how the openly out athletes deal with the aftermath of coming out.

Now I am able to freely talk about my sexuality around my teammates, which seemed like a farfetched dream just two years ago. I believe that I became more connected to my team than ever before. I acknowledge the progress some made with accepting me for who I am and I am truly thankful to those who were these since the beginning. As happy as I am with seeing the team dynamic change over the years, I wish that coming out as an athlete was easier much earlier.

As more and more athletes come out, the sports community becomes undeniably more LGBT friendly. But although we hear many recent coming out stories, many times we fail to ask what comes after the announcement. The journey of a gay athlete is so much more than the announcement itself. A true estimation of the progress made in the world of sports is how the openly out athletes deal with the aftermath of coming out.

Coming out to a team certainly changes the dynamics one way or another. At least for me it was a constant journey throughout my career as a college athlete. Although being openly out feels like less of a burden than hiding a secret, being an LGBT athlete brings many challenges. The locker room is a place where being an LGBT athlete can prove to be the most uncomfortable. Although I was comfortable being gay, I was anxious about my teammates would feel less at ease around me. As time passed and seasons ended, I understood that it wasn't about fitting in but rather about using my differences to help my team succeed. 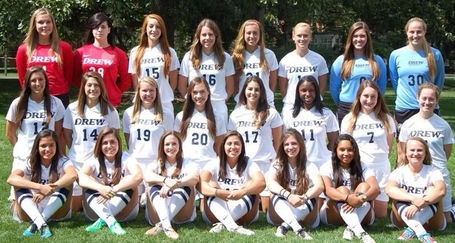 Agata Dera, second from left in the top row, with her Drew teammates.

I am so proud to be a Drew University athlete and that will forever be a part of who I am.  I'm thankful for those teammates who welcomed me with open arms. I am also grateful for those individuals who stood by me at all times helping me become the best athlete I could be.

Coming out as an athlete has definitely been the most difficult thing I have done. Being an out athlete taught me a great lesson about the importance of my identity. I believe that my journey helped me learn to embrace who I am and be proud of being a lesbian. My experiences made a great impact on my career goals as an LGBT activist. I hope that by sharing my story I will impact athletes as well as the sports community in ensuring that every athlete has the same opportunity to grow, learn and be the best athlete they can be.

Agata Dera, 22, is an LGBT activist and a recent graduate from Drew University in New Jersey where she was a goalkeeper on the women's soccer team. She majored in psychology and minored in sociology. She is also a Sports and International Media intern at GLAAD (Gay and Lesbian Alliance Against Defamation). She is also an intern for Deborah Glick, NYC Assembly member of District 66 and the first LGBT member of the New York Legislature. In the fall she will pursue a Master's Degree in social work with social enterprise administration from Columbia University.
She can be reached on Facebook.