UFC fighter bends over to show support for gay marriage

Share All sharing options for: UFC fighter bends over to show support for gay marriage

Kyle Kingsbury, a mixed martial artist fighting in the UFC, announced his retirement from the sport following a lopsided loss on Saturday, but he went out with a bang.

At the weigh-in for his fight against Pat Cummins, Kingsbury bent over to show his pink briefs that included a pro-gay marriage message: 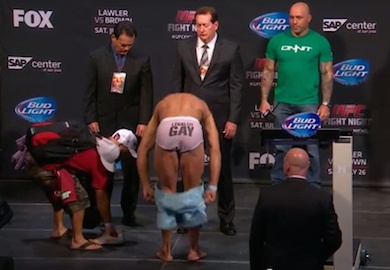 Hmmm, maybe the federal judges that struck down Virgina's gay marriage ban today were on the fence until Kingsbury's action changed their minds.

In an unrelated story, here is the headline Bloody Elbow used to describe Kingsbury's retirement: Kyle Kingsbury announces retirement: Recalling his legacy as the guy who ejaculated on sushi on The Ultimate Fighter."