Brad Thorson came out as gay on Independence Day. He played college football for Wisconsin, Kansas, and he was with the Arizona Cardinals for their 2011 training camp.

Brad Thorson, a former college and NFL football player who was briefly with the Arizona Cardinals, came out publicly as gay on his blog on July 4 as his own personal Independence Day celebration. His blog post was titled Seeing Through the Fog:

I've been told many times that the process of coming out is cathartic. Yet since coming to terms with my sexuality, I found it arduous and unnecessary. At least that's what I kept telling myself. So today, I'm putting it in writing and not looking back.

I'm also an athlete. For years, I struggled to unite these two identities in my own mind. Not until after my professional athletic career came to an end did I allow myself to understand my sexuality. Now, three years later, I'm finally ready to share that with people.

The eagle has landed

The exclusive behind-the-scenes story of Michael Sam's coming out.

Former football captain was openly gay The eagle has landed

"I had tried to write it many times before but just didn't have the right words to say," Thorson said. "I got home on Wednesday and wrote it out and thought it was fitting for this weekend, so I took the plunge. I was so nervous before I wrote it, but once I wrote it I was proud of writing it and it wasn't something I wanted to hide away anymore."

Posting the message was cathartic, and many of the fears he held quickly evaporated.

"As soon as I hit send, it all dissipated and I remembered that I had all of my friends and family who already supported me. It was a real relief afterward. Everyone who has reached out have been nothing but supportive. I should have expected that all along."

Thorson played college football at both Wisconsin and Kansas, where he was an offensive lineman. He was on the 12-1 Wisconsin team in 2006 that finished No. 5 in the country.

At 6-foot-4, 300 pounds, he went undrafted by the NFL in 2011 - NFLDraftScout ranked him the 24th best out of 49 centers in the draft that year. He signed with the Arizona Cardinals in the summer of 2011 (the lockout year) as a free agent and was put on injured reserve when he broke his foot. He never played in a regular season game.

He headed to the Canadian Football League's Regina Roughriders to attend their training camp the following season, but Thorson quickly realized he wanted to leave football behind him. He quit football and headed for a future in business.

All of his former teammates who have heard that Thorson is gay have told him the same thing: It doesn't change their feelings about him, he's still the same guy, and if he's happy, they are happy for him.

Thorson now lives in San Francisco, where he plays with the Fog rugby team, Sept. 11, 2001 hero Mark Bingham's former team. Thorson has found what so many LGBT athletes have discovered with "gay" sports teams: a much-needed family and support structure:

I moved to San Francisco for work ten months ago and had the fortune of finding the Fog, an open rugby team. I'll likely never forget my nerves as I drove up to my first practice. Without question, it was more nerve-wracking than when stepping onto the football field against some of the best defensive linemen in the country; at 26 years old, my fear of being outed was still that extreme. Much of my maturation occurred in a hyper-masculine environment that demeaned homosexuality, and the idea of gay men competing, much less alongside straight men, was all too foreign to me.

Since that first practice, the Fog has become a family to me. They've taught me a new sport and to accept myself. A month ago at our annual banquet, I met Mark Bingham's mother. She shared her son's journey in understanding his masculinity and homosexuality and how he helped her become an advocate for GLBT rights. Mark was a former Fog player who helped overtake United 93 and whom the gay rugby world championship is named for. Now, in just over a month, I'll be traveling to Sydney to compete for the Bingham Cup."

Thorson told Outsports he hopes by telling his story he can reach other athletes who, like his younger self, were struggling to find acceptance and a role model who looked like them.

"I didn't know there was anyone else like me when I was growing up," Thorson said. "Reading about Brian Sims talking about being out to his teammates and playing for the national championship, it made me feel like there was someone out there who was like me. I know there are other kids out there struggling, and I hope some of them can relate with me on some things and make them feel more comfortable with who they are.

"I regret not doing this sooner, but we all come to this on our own timeline. The last three days since coming out have been amazing. Hopefully this will help some kids get there too."

You can follow Brad Thorson on Twitter @bbthorson. If you're an LGBT athlete and would like to reach out to Thorson, you can also email him at bbthorson@gmail.com. 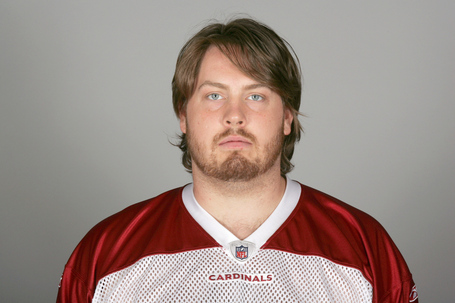 TEMPE, AZ - CIRCA 2011: In this handout image provided by the NFL, Brad Thorson of the Arizona Cardinals poses for his NFL headshot circa 2011 in Tempe, Arizona. Photo by NFL via Getty Images.