Nate Alfson used to fear road trips on his college baseball team and lived a life in the closet. Now out, he knows what true happiness is.

The phrase "in the closet" has always rubbed me the wrong way.

I’m not sure if it is because I used to be "in the closet" and I was scared of coming out, or if it was because of the misconception of what it actually means to be "in the closet." I believe most people who are openly gay would agree it is not just a dark quiet place.

It's a closet so small you literally can’t move. No turning, no bending, no squatting, nothing. Along with the pitch black atmosphere, there are sharp needles pointing at you everywhere and any time you make too big of a movement it jabs you. Some jabs hurt more than others. For those who are or were in the closet, we became masters of standing still and hiding from the world.

When you aren’t openly gay and you are an athlete or a coach, any subtle tell turns into an insecurity. It is gut-wrenching when a teammate, friend or colleague teases you or bluntly asks "Dude, are you gay?" or -- my personal favorite -- "Dude, I heard some guys talking and they think you might be gay." Because I was a college athlete and now am a high school varsity coach for two different sports, I always had the misconception that I had to be super manly, which meant no musicals, no expressing my feelings or not showing I care by doing nice things for someone else.

Male athletes are supposed to be sweaty, aggressive, lift weights and talk to each other about how hot it would be to be with a girl. As a gay man who  appreciates women for their beauty but not in a sexual way, it was one heck of a challenge to play along with the conversations. "Hey Nate, I saw you talking to that one girl. She’s got nice boobs! Get after it buddy."  I learned to respond by redirecting the topic to something else about the person. For example: "Well,  she is pretty awesome at volleyball, we hang out quite a bit." And then just leave it at that. It seemed to have worked for me through my high school and college years.

My name is Nate  Alfson. I was a high school athlete, music geek, and friend to many. I went to college to play baseball and earn a degree in sociology with a focus on psychology. I graduated from Augustana College in Sioux Falls, South Dakota, and now coach varsity baseball and volleyball in a small town outside of Sioux Falls called Dell Rapids  I play on Dell Rapids' amateur baseball team and also in multiple volleyball leagues and tournaments. I was born in Pipestone, Minnesota, which is right on the South Dakota-Minnesota border. Unfortunately, the feeling in this area about openly gay people is "hush hush." I do have gay friends from around here, but too many.

I identify myself as a gay, Christian, athlete with a lot of different interests. I am writing my story to share with the world that it is OK to be who you are born as and feel confident about it. I have found that there are other people in the world just like me and I don’t have to feel alone any longer. I am a proud openly gay man with a great job as a program coordinator for an agency that serves adults with disabilities.

I remember one game where I imagined that the other team had found out I was gay.

I came into school focused on passing classes and being a successful athlete but I was increasingly feeling insecure and lonely. I craved companionship and close friendships and dreamed (and still do) of sharing who I am with someone special. There were times in college where I would try to get close to certain friends and hope that they would care about me so deeply that eventually I would be able to share with them that I was gay. At the same time, I was also praying and wishing that God would make my feelings towards other guys go away. I despised the fact that I had these feelings and would spend countless nights awake, crying, and hoping that someday I would be able to feel like I could be with a woman.

I hated going on road trips with my team because I was afraid no one wanted to talk to me or sit by me or sleep in the same hotel room as me in case they had a feeling that I was gay. It was constantly on my mind. Even in the middle of games I’d get anxious about it. I remember one game where I imagined that the other team had found out I was gay and they started chanting it while I was hitting or playing the field. In the middle of my at-bat this was going through my head! Needless to say, my at-bat didn’t go over very well and my coach asked me why I seemed so out of it. I came up with a lame excuse that I was expecting a curve ball, when I was actually just scared that others knew my secret. 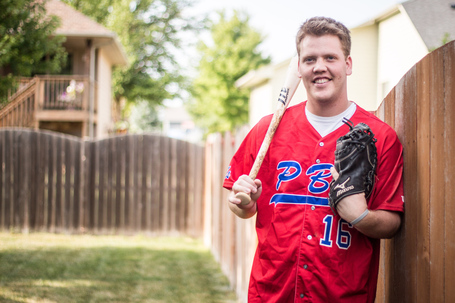 It was a daily fear that my coaches would find out and then I would lose my starting spot. Obviously, this was blown completely out of proportion and all in my mind, but when you aren’t out of the closet, any situation seems realistic.

During college I was blessed with some amazing friends who may have had a hunch I was gay, but loved me for who I truly was. My sleepless nights  turned into late night chats, or piano playing or extra hitting. Things seemed to feel like they were going to be OK and that I didn’t have to come out because I found a group of people who didn’t question anything I did.

Just when things were going well, I had two major setbacks. One was physical -- I was told I needed a  third surgery on my knee. The second was emotional -- my parents got a divorce. It was a devastating realization that my family was not as close as I had imagined. My heart was broken, and my feelings of inadequacy, loneliness, and insecurity came rushing back so I hard I couldn’t stand it. I began having anxiety attacks and prayed more than ever.

It was Christmas 2012 and I had had enough. I finally came out to some of my closest friends and eventually my parents. My dad surprised me with his reaction. He was as supportive as everyone else I had told, but he decided to express it with humor. He’s very quiet and calm and isn’t one to express a lot of his emotions -- he's like a big teddy bear -- but he had a big heart and always surprises me when he does share his feelings.

As I was crying, he looked at me and said, "Nate, I don’t care. I’m happy you’re happy and will support you always. Here’s a thought, why don’t we just pray the gay away?" He then started giggling and continued to tease me, his way of saying there was nothing to feel ashamed of.

Since then, I have begun to reach out to a few of my athletes and their families. I shared with them my appreciation for their support and that I love being able to coach and be a good role model. The families I told were so encouraging and I believe that the rest of the community will support me.

I haven't yet told officials at the Catholic high school where I coach volleyball. This might be a challenge but I am confident it will work out for the best and the Earth will still keep turning regardless of the outcome. I hope it doesn’t affect my opportunity to be a good role model for the  athletes.

My burden lifted, I have never felt "lighter" in my life.

It was hard at first to be able to accept being gay and actually say it out loud. My friendships have become stronger than ever. I have now been accepted and embraced by some former teammates and coaches, some athletes I’ve coached, family friends, family members and all my closest friends. The freedom and happiness that comes along with being yourself is like nothing I’ve ever felt before.

I used to believe that my happiness was being successful as an athlete and by making other people happy; a people-pleaser to the max. After coming out, and freely talking about who I am, I found what true happiness actually was. My  burden lifted, I have never felt "lighter" in my life. Being cared about by others is a great and necessary feeling, but caring about yourself is even important. The quote that says you can’t love someone else without first loving yourself is true.

My advice to closeted gay athletes or anyone who may be struggling with themselves would be to first take a deep breath and know that there are people in the world who care about you and understand what you’re going through. Finding that support system first was the most helpful thing I did and reading other stories by openly gay athletes of how happy they are and how much support they have received allowed me to be confident enough to share my story.

We are all in this together and we can change this fear inside ourselves one story at a time. Make a difference in the world by being kind to one another and don’t be afraid to do good deeds to those around you. A smile goes a long way. Be you, be true, and never forget that you matter.

Nate Alfson, 25, coaches high school baseball and volleyball in Dell Rapids, South Dakota. He graduated from Augustana College in Sioux Falls, South Dakota, where he majored in sociology and was on the baseball team. He can be reached via email (naalfson09@ole.augie.edu), Twitter (@NathanAlfson) and Facebook (Nathan Alfson). He would enjoy hearing from other coaches and athletes.