NFL Week 2: It's the straight players who are causing the distractions

Domestic abuse and child abuse charges dominate the news, yet we worry about the gays. Plus: Seahawks lose, Richard Sherman is a baby and hot players of the week.

Share All sharing options for: NFL Week 2: It's the straight players who are causing the distractions

The thing that pissed me off the most after Michael Sam came out as gay in February was the regular chatter in the NFL about how having an openly gay player would be such a distraction. It was trotted out before and after the draft, before training camp, during the preseason and after Sam was cut and was looking for another team.

Best time for a gay player to come out

Best time for a gay player to come out

While there certainly was much increased media attention on Sam, the St. Louis Rams handled it smoothly and the players and coaches all said Sam was no distraction. I wrote last week -- partly in jest -- that the league would welcome another openly gay player to take the attention off the Ray Rice domestic abuse story. Sunday intensified those feelings:

Michael Sam, meanwhile, is quietly playing on the practice squad of the Dallas Cowboys, working towards what he hopes will be a spot on the team's active roster. The next time you hear anyone claim that a player simply coming out as gay without any other circumstances will cause a distraction, tell them to STFU.

Around the league in Week 2:

--After two weeks, there are no dominant teams. The Seattle Seahawks, who looked great in Week 1 in crushing the Packers, were legitimately manhandled by the Chargers in San Diego, 30-21. So much for my idea that Seattle was going to go deep into the season unbeaten. Temperatures on the field were 115 degrees and the Seahawks wilted, as San Diego held the ball for 42 of the game's 60 minutes.

In Denver, the Broncos went to 2-0 but for a second straight week had to hang on at the end, beating the Chiefs, 24-17. In two games, the Broncos have gotten out to double-digit leads only to sputter in the second half. They have outscored their opponents 45-17 in the first half and been outscored 24-10 in the second half. The Chiefs resemble an urban emergency room with six key starters hurt, yet they outplayed Denver in the second half. In one of the weirdest drives ever, the Chiefs used 10 minutes of the clock and ran 19 plays only to miss a field goal in the third quarter. A score there and Denver might have joined Seattle in the 1-1 club.

--The Saints were a trendy NFC Super Bowl pick but fell to 0-2 after another late-game choke by their defense. On Sunday against the Browns, a blown coverage allowed Cleveland receiver Andrew Hawkins to get wide open for a catch that set up the game-winning field goal in a 26-24 Browns win. Since 2002, 100 teams have started 0-2 and only nine made the playoffs, a bad sign for the Saints.

--In contrast, the Carolina Panthers are 2-0 after shutting down the Detroit Lions, 24-7. I had the Panthers finishing last in their division after letting all their wide receivers go, but their defense continues to be among the league's best, and that will keep the Panthers in games all season.

--Seahawks cornerback Richard Sherman is a front-running baby. When Seattle wins, you can't shut him up about how awesome he is. Yet when his defense fails to stop the Chargers and he has an off day, he refuses to speak to the media. That's a chickens**t thing to do.

--Only the Jets can negate a late game-tying touchdown by someone on their team calling a timeout a nanosecond before the ball was snapped. At first everyone thought it was assistant Marty Morhinweg who called the timeout (which is against league rules since only a head coach or player can do so) but apparently it was defensive lineman Sheldon Richardson standing on the sideline (read the convoluted reasons here) who whispered "timeout" in the ref's ear. Instead of tying the Packers 31-31, the timeout wiped out the touchdown and the Jets wound up losing, 31-24.

--It's early, but let's make the Tennessee Titans the team you won't want to bet money on either way. In Week 1 they traveled to Kansas City and spanked the Chiefs, 26-10. In Week 2, at home and solid favorites over the Cowboys, they got run over in a 26-10 loss. Jekyll, meet Hyde.

--The San Francisco 49ers inaugurated their new stadium by roaring out to a 17-0 lead against the Chicago Bears. They then forgot how to play pass defense and Jay Cutler threw three touchdowns -- including three to Brandon Marshall -- in leading the Bears to a shocking 28-20 win. The 49ers are now 0-3 when opening a new stadium.

--Hot player of the week 1: Austin Davis, quarterback, St. Louis Rams (photo at top of story). Davis is the Rams third-string quarterback, pressed into action because of injuries to Sam Bradford and Shaun Hill. He responded by going 22 for 29 and leading the Rams on a late drive resulting in a field goal and a 19-17 win at Tampa Bay.

How green is Davis? The last time he started a game was as a quarterback at Southern Mississippi in 2010, Brett Favre's alma mater. By the way, the Bucs have now lost at home to two backup quarterbacks, not a good way to start the season.

--Hot players of the week Nos. 2 and 3. Randall Cobb, below left, and Jordy Nelson of the Green Bay Packers. Cobb had two touchdown catches, while Nelson set a franchise record 209 receiving (and one TD) in the Pack's 31-24 win against the Jets. 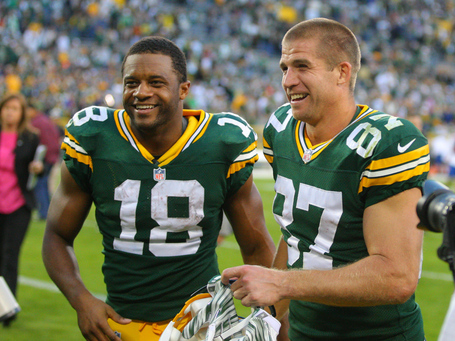