The secret double life of a gay basketball coach

Former basketball player and coach Katie Barnes talks about their fear of being out and having to live a double life while they coached at a Catholic school.

Share All sharing options for: The secret double life of a gay basketball coach

Campus Pride is teaming up with the LGBT Sports Coalition and others to create an index of college athletics programs based on their inclusion of LGBT issues.

Former Univ. of Richmond basketball players Leah Johnson and Miah Register allege they were the victims of homophobia and racism while they were at the school. Their new organization aims to bring understanding across intersectional identities.

I breathe basketball. A ball in my hand completes the composition of my body. Each dribble pounds the floor in time with the beat of my heart, the rhythmic ripples pulsing to my toes. A dimly lit gym is my sanctuary, the swish of the net my Gloria. I lived for the gym both as a player and as a coach, and I ache for it while I'm on hiatus due to graduate school.

Basketball is my first memory. At the age of 4 I made my first basket. I shot a pink, rubber ball into the beat up basketball hoop in my driveway. Like a good Indiana kid, I became obsessed. I started playing competitively at 8 years old. My parents drove me to the Plymouth Boys and Girls club to play in a coed league. It was the only place within 45 miles where I could play.

I began traveling in seventh grade and playing all year round, doing my homework in the car and playing nearly seven days a week. I played AAU for a few seasons, and still remember lacing up my shoes for the first time against Bethany Christian. I was 14 and it was my first varsity game. Basketball is in my blood, in my bones; being gay doesn't change that.

I came out my junior season. We were in the middle of the first winning season in quite a few years, and I started at point guard, as I had since my freshman season. In high school I came out slowly, telling a few people at a time. I was not the first person out at my high school, and not the first athlete either. Most of the reception had been positive, especially from my teammates. For the most part, it was not a big deal. I came out; I played; and was made captain my senior year. The person I did not come out to, however, was Coach.

Though his name is Gary, and technically I am allowed to call him that, he will always be "Coach." As a point guard, I had a special relationship with Coach. He pushed me to be a better leader and a better player. He developed my basketball mind by taking me on scouting trips with him. On the floor, I was truly an extension of him. Former teammates and current players joke about us being "brain twins" and two peas in a pod.

Yet our relationship has never been personal, which is how I justify not telling him I'm gay. To be fair, he absolutely knows (his wife is my Facebook friend), but he has never heard it from me. The only exception to that came in the wake of ending of my engagement. I received a text from Coach that read: "I heard that you're going through a rough time, but on the bright side, at least you'll be able to watch more film for me." That text meant the world to me. In that moment, I wanted nothing more than to tell him everything, but I didn't, and I still haven't.

I was and still am afraid.

Coming out is a measured experience, one that is continuous. It is not a state of arrival. Despite the public work I do, the clothes I wear, and the visibility I have within the LGBT movement, there will always be a moment in every conversation when I make a decision as to whether or not to come out. In those moments I experience a bit of fear. Though I felt some trepidation when considering coming out to Coach, I would have never said that I was "closeted" around him. If there is in fact a closet, it is a giant room in the center of the house built of glass, not the cupboard under the stairs. In my life as an LGBT athlete, I never felt the need to hide who I was, but then I started to coach.

My sophomore year at St. Olaf College, I applied for a coaching position working with sixth, seventh and eighth grade girls at a small Catholic school in Northfield. When I got the call, telling me they hired me, I was over the moon. I couldn't wait to get started. I always said I would be a better coach than I was a player, and I couldn't wait to prove it.

As my father taught me, I read my contract thoroughly. I noticed one clause under grounds for termination: "found in support of values not in accordance with those of the Catholic church." Immediately, I found myself in a closet. It was sudden, jarring, and almost an out of body experience.

For two years I lived a double life. I went to practice and games, and focused on being the best coach I could, and afterwards, I trekked back up the hill to my rainbow flag flying house. Parents offered to give me a ride home, but I refused for a long time. If I did accept a ride, I always met them at the student center, never my really gay house. 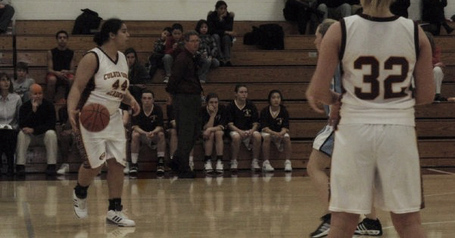 While coaching in my bubble, I simultaneously blossomed into a well-known student LGBT activist. I landed a position on the executive board for a state-wide network of resources, did a lot of work with our student organization GLOW!, was co-president of the queer house, and chaired Minnesota's LGBT conference for college students. I loved the work I did, but as soon as I entered the gym, it disappeared. It had to.

But people are curious. They wanted to know what I did on campus and what papers I worked on. The girls asked about my "boyfriend" incessantly because they were convinced that my (also gay) roommate, Brian, was the love of my life. When my actual significant other visited, we never held hands in town because I didn't know who I would run into. The closet had gone from a tiny bubble, to ruling most of my life.

During Minnesota's LGBT conference, I ran into a parent in the St. Olaf cafeteria. I was wearing a teal blue shirt, a rainbow headband, a rainbow wristband, and had rainbow beads draped around my neck. I spent two years checking, and rechecking my bags, clothes, and laptop to make sure I removed all of my rainbow buttons and stickers, yet there I stood, draped in it. I immediately panicked, paralyzed with fear. I had already confided in this parent about my sexuality, as I had a few others, but my first question was, "is anyone else here?"

My lives had officially converged, and I stared headlong into the hypocrisy of the life I led. I knew something had to change, but I loved my job, loved my girls, and loved to coach. I didn't know if I could keep my current position and still be out, and I was too afraid to find out.

A week later, I heard of an opening at the high school as the head coach of the ninth-grade girls. I took that job with a broad smile on my face. Not only was there a non-discrimination policy, but two of the girls I coached previously would be on the team. That season, I learned the importance of openness from a coaching perspective. Nothing changed with my new feelings of safety; I never showed up to practice in rainbow, but I could be honest. If asked about my involvement on campus, I could talk about it. If someone asked about the pretty woman accompanying me to basketball games, I could say she was my significant other. In my coaching career, I never experienced that, and even as a player I could never be that open, because I feared what Coach might think.

Coming out is mostly about honesty. When we hide who we are, the most mundane questions become an exercise of gripping fear. "What will they say?" "How will they react?" "Will he still want me around?" "Can I still play?" "Can I still coach?" These are all questions that have run through my mind at some point, certain ones still do.

Even though I've been "out" for almost seven years, I am still faced with uncertainty about when to share pieces of myself. I opted for openness with the logic that anyone who doesn't value the fact that I'm gay and an LGBT advocate should not be someone in my life or my potential employer. And though sometimes I feel tiny bits of fear creeping in, I've learned that the liberation from that fear is worth the struggle.

Katie Barnes is the President of the Campus Pride Advisory Board and sits on the Board of Directors of the organization. They recently attended the LGBT Sports Summit in Portland, OR, and continues to be involved with the College Group of the LGBT Sports Coalition. Katie is a current graduate student at Miami University, working on a M.S. in Student Affairs in Higher Education. You can connect with Katie on Twitter by following @katie_barnes3 or through email at katherine.e.barnes@gmail.com.