While the IOC's new policy is lovely, it represents no progress for equality in the Olympic movement.

Share All sharing options for: Olympic plan to bar discrimination in host cities is nothing more than lipstick on a pig

Ban Russia from their own Winter Olympics

A boycott is ineffective and targets the wrong people. A ban of Russia from its own Games would have a powerful effect.

The International Olympic Committee has announced that it will "force" future Olympic host cities to sign an anti-discrimination agreement before they are able to host the games.

On its face, this is a step in the right direction. Some LGBT activists are claiming credit, celebrating this as some big success for the community.

Forgive me if I'm not popping the champagne. In reality, this is nothing more than a publicity ploy to quiet critics some of whom, by all accounts, are buying it hook, line and sinker.

Just take a look at the photo below from last week. IOC president Thomas Bach is celebrating at an Olympic luncheon in...South Korea, where same-sex marriage is illegal and same-sex intercourse is labeled "sexual harassment" and "reciprocal rape." Bach is celebrating in the photo with Ahmad Al-Fahad Al-Ahmed Al-Sabah, president of the Olympic Council of Asia. He is a politician in Kuwait where - wait for it - male homosexuality is punishable by a year in prison. Don't even think about same-sex marriage or equality for women or religious freedom. Zip it!

This is the reality of this toothless new IOC policy. The Olympic charter already expressly forbids discrimination, yet discrimination is allowed to pervade countless member nations, all of whom are welcome with open arms to participate. Some scribbled words on this new "agreement" will give cover for the IOC to claim it's inclusive and fighting the good fight, all the while embracing nations that behead people for "witchcraft" and stone people for being gay. 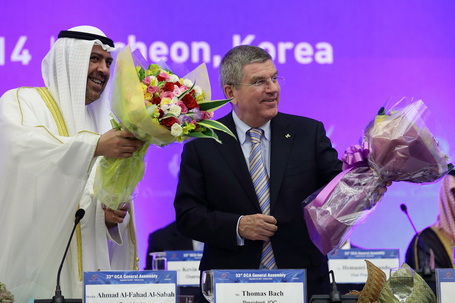 So while some LGBT rights groups are running victory laps and lauding the IOC, this is nothing more than the IOC's latest attempt to put lipstick on a pig.

"This is PR boilerplate," Dave Zirin told me. Zirin has written extensively on the Olympics and the International Olympic Committee. "I've seen this with other stuff before from them. It's a PR exercise that sucks in some really good people, people I totally respect who do a lot of really good work. They bring them in and point to them as part of the process, and it gives a sheen of legitimacy."

Even if it were a real measure with some teeth, this new policy would affect one city every two years and won't even come into effect for eight years. If the 2022 Games were held in Dallas, it would do nothing to change the issues in Little Rock or Nashville or Atlanta or Minneapolis...or even Houston. Implemented years ago, the IOC would have easily found a way to have Sochi sign the commitment while at the same time allowing Moscow to do whatever it pleases. If they didn't, the Olympics would have no suitable home because, ultimately, institutional discrimination is in every corner of the world.

Consider this. While we in the United States are in a hot debate over race in America, just last year we were named one of the most racially tolerant nations in the world. Though New York City is considered a bastion of acceptance, police there are accused of racial profiling and worse. Same-sex couples, and anyone else with fertility issues, are handcuffed by New York surrogacy laws. Any same-sex marriages there are not recognized federally.

If New York City faces discrimination issues, where on earth could be a suitable place to host a discrimination-free Olympic Games? Finland? Not so fast - The vast majority of Finns themselves say their country is racist.

And if the standards need to be adjusted, exactly who's standards will be used when determining what "discrimination" looks like? If history tells us anything, it will be a bunch of old, rich, straight, white men. Forgive me if I'm skeptical.

While they throw out this red herring of "fixing" one host city every two years, they continue to allow nations with deplorable human-rights issues the ability to compete. Forget for a moment that even places like the United States have serious discrimination issues. Let's just take a couple examples - like North Korea and Uganda - with very clear, grotesque human-rights violations. That these nations are allowed to compete in the Olympic Games is a far truer statement of the current perspective of the IOC than some meaningless "agreement" with a host city every two years.

The IOC will continue to do nothing to affect the laws and climate in any of these nations because it is, quite simply, bad for business.

And what of the consequences if the host city were to break the agreement? Last year Russia passed new anti-LGBT laws months before Sochi hosted the Olympics. Is the IOC really going to move the multi-billion-dollar Olympics if a city breaks the agreement months ahead of time? No, they are not. There is way too much money at stake. If Russian police rounded up gay people and executed them in the streets of Moscow the month before the Olympics, they would have still hosted the Games.

I can see the press conference by Bach now, explaining it away:

"While Russia has made discrimination legal on a federal level, the city of Sochi is as much hostage to the laws as we are. We cannot punish Sochi for Moscow's actions. Therefore we will be moving forward with the Games as planned in Sochi."

They would have been given the same cover they used eight months ago. Various key figures in Russia, including Vladimir Putin, assured the world that for those two weeks of the Olympics there would be no discrimination (by many accounts, he was right - though free speech was squashed). Organizers of the Games in Sochi distanced themselves from the federal law. Remember, the policy affects host cities, not host nations. An agreement signed by Games organizers and the Mayor of Dallas does not affect change in Texas or the United States.

Russia was able to put on a good face for a few months. They were a peaceful nation leading up to the Olympic Games, holding back arrests and extending a hand to the rest of the world.

As soon as the Games were over they occupied Crimea and gassed gay people, forcing the closure of Russia's largest gay club and threatening to invade the rest of a sovereign nation.

No "agreement" between the IOC and a city would stop this from happening the day after any closing ceremony.

"The IOC is a company whose core beliefs revolve around public relations and how to monetize the Olympic experience. It's certainly positive that they understand it's a financial loser to look like they are supporting bigotry, but we shouldn't think this is going to have any real teeth."

This is not an "amazing move." This not a "significant step." This is "bait and switch," nothing more than a token nod designed to quiet advocates who mostly have good intentions.

If you want some serious action from the IOC, they need to ban the participation of nations that have clearly problematic human-rights records.

Anything short is simply lipstick on a billion-dollar pig.