"That would not be something that I have ever done," Jerry Jones says. Plus, Pats start 0-1 for first time in 11 years; bonehead plays; hot player of the week.

Hard to know what to make of reports that the NFL contacted several teams to ask them to consider signing Michael Sam to their practice squad. This is what Peter King of Sports Illustrated's MMQB.com reported on NBC: "A league official contacted multiple teams asking if they had evaluated Sam as a probable practice squad player. Sam and the NFL avoided a nightmare situation when he signed with the practice squad of the Dallas Cowboys."

On Sunday, Cowboys owner Jerry Jones denied there was any pressure, telling a Dallas radio station: "No we were not [contacted]. That would not be something that I have ever done, is visit with the league." Jones said he signed Sam for his pass rushing ability, a major need on the team. Sam is on the practice squad but can be called up to the active roster any week.

King has great NFL sources, so I don't think he made it up. I wrote last week that the Sam signing saved the NFL from a major distraction on the eve of the season opener. Up until then, he was the only one of 12 players who had 2.5 preseason sacks and had not found a team; he was also the only openly gay player. Also, anonymous NFL personnel people were quoted as saying that they were shying away from Sam because of the "media circus" and distractions.

The NFL stepping in to help Sam is disturbing. In the first place, his preseason play clearly earned him one of the 320 practice squad slots (we're not taking regular season roster here), so the fact it took so long was an indictment of the league. And yet having the first openly gay player needing league help to get a job goes against what we've all wanted. It was as if the NFL had to counterbalance the lingering prejudice on the part of some teams. I hope Jones is correct that his organization took Sam for his football ability, even if other teams were asked personally by the league.

I think the take away for me is that other gay players will think twice about coming out unless their positions on their team is secure. The NFL has progressed but not as much as I might have hoped.

Around the league on Week 1:

--My preseason Super Bowl pick was Seattle over Denver, which would be the first Super Bowl rematch since 1993. Both teams won in Week 1, with Seattle looking totally dominant in crushing the Packers. I think only injuries can derail Seattle as it seeks to repeat; they're loaded on both side of the ball and Percy Harvin takes the offense in another, high octane direction. As for Denver, the Broncos roared out to a 24-0 lead over the Colts, then had to hold on for dear life to win, 31-24. I am just glad I had Julius Thomas -- three touchdowns -- as my fantasy tight end.

--Shocker of the day was the Patriots losing 33-20 at Miami to the Dolphins, the first season opening loss for New England since 2003. The Pats, for the first time since Bill Belichick became coach in 2000, are all alone in last place in the AFC East, a division they have dominated since 2001. It's worth noting that the Patriots won the Super Bowl in the 2003 season after losing their opener 31-0, so there is no reason to panic.

Tom Brady looked ordinary Sunday and it wasn't all due to his new beard. His offensive line was overrun and he was sacked and harassed in the second half, losing two fumbles. Throwing 56 times vs. 20 runs is not a prescription for winning. In addition, tight end Rob Gronkowski looked rusty coming back from knee surgery and the defense -- supposedly a strength -- was manhandled badly in the second half.

--In the NFC, the New Orleans Saints were a trendy Super Bowl pick (though not by me), in part because the defense was supposed to be almost as good as the offense. Well, the Saints gave up 568 yards in the wild 37-34 overtime loss to the Atlanta Falcons. That's ugly and a bad omen for the season.

--Bonehead play of the day was by Baltimore Ravens quarterback Joe Flacco in their 23-16 loss to the Cincinnati Bengals. With eight seconds to go in the first half, the Ravens were in prime field goal range when they decided to run one more play. Flacco stupidly held the ball way too long and took a sack as time expired. The result was the waste of a drive. You'd expect this from a rookie in his first game, not a guy entering his seventh season. "That was probably the stupidest play I ever made in football," Flacco said.

--The Kansas City Chiefs started the 2013 season 9-0. Now, with their embarrassing 26-10 home loss to the Tennessee Titans, the Chiefs have lost seven of their last nine games, including last season's playoff collapse to the Colts. They signed quarterback Alex Smith to a big contract extension and he paid them back by throwing three interceptions against the Titans. To make matters worse, two key defensive players were lost for the season with ACL injuries. With at a game at Denver next season, the season may already be perilously close to being lost.

--Tony Romo throws three interceptions, including a ghastly one into the end zone. Some things never change.

--The Cowboys had a home game against the 49ers, but the sea of red in large parts of the stadium made it look like San Francisco south.

--Good humor of the week: Cleveland Browns punter Spencer Lanning tweeted this after being kicked in the head during a return by the Steelers' Antonio Brown:

Wait, wait, wait... When did this happen?!? pic.twitter.com/SzU9wDVx23

--Hot player of the week: Jordan Cameron had only two catches vs. the Steelers, but one was a nice grab and run for 47 yards. And he is one of the hottest players in the league: 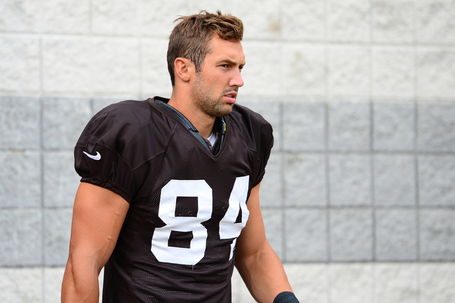