Chris Burns has come out as gay, making the Bryant University basketball coach the first in men's Division I college basketball to do so. It's been quite a journey for the former star player to get to this place.

Something changed for Chris Burns after the 2014 Nike LGBT Sports Summit.

The Bryant University assistant men's basketball coach had existed in the macho world of collegiate basketball as a star player and now a coach to young athletes like his former self. Being gay was a secret he had to keep far from his coaching staff, his team, and anyone else at Bryant, even as one of the school's star players a decade ago. Or so he believed.

Yet that weekend in Portland, gathering under the swoosh with other LGBT athletes and coaches, a glimmer of hope shone on the horizon. Burns had found community, other people in big-time college sports, from Texas Christian University to UCLA, who were gay just like him.

It had been a struggle to convince Burns to come to the Summit at all. The idea of being in that environment was daunting. All his life he had forced his gay identity to be separate from basketball. The act of getting on a plane and flying 2,500 miles to dive head-first into that dynamic was daunting, and it wasn't until hours before the event kicked off that Burns committed to take the leap.

Bryant's school mantra, emblazoned on its Web site, is simple: "Create your path. Expand your world. Achieve your success."

Chris Burns was a star player at Bryant 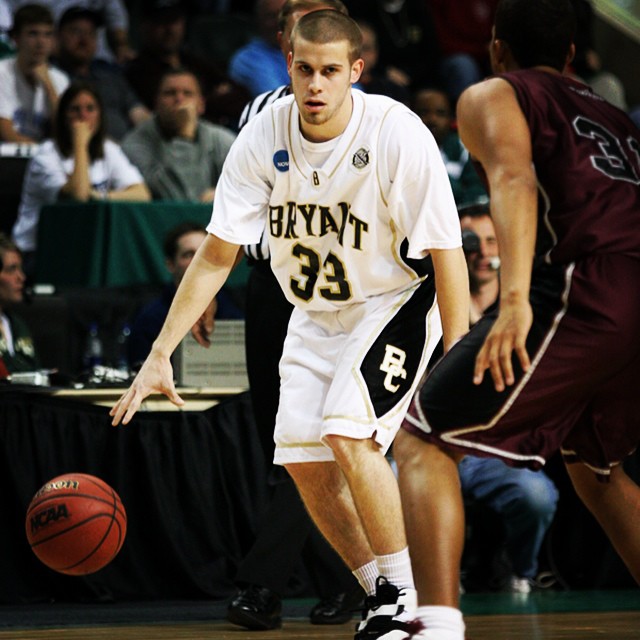 Chris Burns was so good in the 2005 Division II National Championship game that he was the Chevrolet Player of the Game despite his Bryant team losing.

Burns had achieved incredible success as a player with the school. From 2003-2007, he helped the team - then playing in Division II - advance to four straight NCAA tournaments. In 2005 he led the team all the way to the national title game and, in a losing effort, was named Chevrolet Player of the Game. According to his Bryant Univ. coaching bio, he was also named the Northeast-10 2003-04 Freshman of the Year and made the All-Northeast-10 first team as a senior in 2006-07. In 2002, playing for Merrimack High School, he was named Mr. New Hampshire Basketball, leading his school to a state title in 2003.

He was really good.

Yet he had been wary of pursuing the other two pieces of Bryant's mandate: Create your path. Expand your world. All his life, sports had been a homophobic enigma, a place where he simultaneously felt completely at home and completely unwelcome. Gay men didn't belong in big-time college basketball. So he stayed quiet, hiding his relationships and excursions to gay pride events from everyone in the sport.

One of those relationships was with Anthony Nicodemo, the Saunders High School basketball coach who has been out and proud for the last two years. The two had been inseparable for years, including during Burns' playing career at Bryant, with Nicodemo driving hours to watch his then-boyfriend play all over the Northeast and Midwest. The two had developed a relationship built in part on their shared experiences of the basketball closet. When Nicodemo came out publicly in 2013, suddenly Burns was in his basketball closet by himself. Internal pressure began to build.

Just over a year ago, not long after the Summit, Burns decided he was ready to take the leap out of the closet in a public way. He became Facebook friends with many of the people he had met in Portland. He had come out to his head coach, even if that continued to provide some struggle. Now he just had to pull the trigger. A year ago he and I had numerous conversations about how and when he would share his story with his players and then publicly. Yet there was something still holding him back.

Chris Burns: It's time for me to come out

Chris Burns has held the secret that he's gay from everyone in college basketball. In an Outsports exclusive, the Bryant Univ. basketball coach writes about relationships, fear, community and finding his truth.

Bryant University in Smithfield, R.I., is the first school in the Northeast Conference to produce a video for the You Can Play Project and enlisted coaches, athletes and administrators from 11 sports.

Chris Burns: It's time for me to come out Bryant's You Can Play video features Burns

"I'm kind of struggling with the process," he said at the time. "I keep letting my fears control my action. Just nervous about the process."

I suggested he answer just one question for himself: "Do you want to be free?"

His response showed just how unprepared he was mentally to share his story with the world:

"How am I not free right now?"

Only he knew the answer to that question. It had been obvious to me and many people who met him that there was a lot of anxiety holding him back, handcuffing him from expressing himself freely. He had answered my question clearly just moments before: "I keep letting my fears control my action." His next response, that he believed himself to already be "free," resounded not just a lack of awareness about where he was mentally, but a lack of support and readiness to come out to his team and to the public.

With the 2014-15 season approaching, doing anything to "rock the boat" faded away and basketball took center stage. The team finished 16-15, losing in the conference semifinals just two wins away from an NCAA tournament berth. With the offseason came more opportunity to explore.

This summer, the control the fear had on him changed. On June 26, the night the Supreme Court of the United States legalized same-sex marriage across the country, Burns was empowered by the national euphoria and sent me a text that he was ready to share his story with the world:

Over the summer he tip-toed out of the closet on campus, slowly sharing his secret with administrators, more assistant coaches, and eventually the team. Every time he shared his secret with someone, his confidence grew. Word began to leak outside the program - Not only was Burns gay, but he was considering sharing his story with the rest of the world.

After he returned from a late-summer trip to the Pacific Islands, he was finally mentally recharged and ready to take this big step:

"Make a difference." That is, ultimately, why he has taken this step. It's not for the publicity, not for any attention. Sure, it in part is about him living freely. But ultimately it is to help other gay athletes and coaches who, like him, have struggled with their identity in major sports.

Now he becomes the first publicly out gay Division I men's college basketball coach. With so few publicly out LGBT coaches in all of college sports, Burns taking this leap is powerful and necessary not just for himself, but for so many other closeted coaches living in fear.

That fear will get its comeuppance Saturday, Nov. 14, when Bryant opens the season at Duke. While some may have concern that the Cameron Crazies will latch onto Burns' sexual orientation to attack and distract the team, the fans already showed how they feel at last season's Final Four, when many of them wore rainbow flags, pins and stickers in support of Indiana's LGBT community. Plus, with Duke coach Mike Krzyzewski supporting Burns both publicly and privately, there's no chance the Duke athletic department will let the fans or players do anything untoward.

Burns has already found his way through that fear. The support he has received from players, coaches, administrators and confidants has reflected that which virtually every men's coach and player who has come out has seen.

It is again his time to shine, for the first time truly free.