After coming out to his football team in high school, Dalton Ray went back into the closet when he went to college at the University of Wisconsin-La Crosse. He found it gets better.

Share All sharing options for: Gay football player got 'It Gets Better' tattoo after coming out to his team

I grew up in a small conservative town in southern Wisconsin with my mother, father, and two older brothers. We were just like every other family around: Parents would go to work, I'd go to school, and on Sundays we would go to church together.

I would say it was around sixth or seventh grade that I realized I wasn't like all the other guys in my school. Sure I loved football, basketball and playing video games, but there was still something not right. Something was missing. Deep down I always knew exactly what that something was, but I'd just brush it off and tell myself "It's just a phase" or "I'll get over it".

Middle school was a challenge, but high school was the true battle for me. Subtle feelings turned into everyday thoughts. It increasingly became clear this wasn't just a phase for me.

To make it even worse I started hearing my peers, including some of my closest friends, use terms like "gay", "faggot", and "queer" to describe when something was stupid or wrong. Eventually that's how I felt - I felt like something was wrong with me, and worst of all I couldn't even look at myself in the mirror because I was so ashamed of who I was.

You know that saying, "sticks and stones may break my bones but words will never hurt me"? I couldn't disagree more. There were some days I'd rather get hit with a two-by-four than hear the crude comments some people made. These words weren't just something I heard in the halls, they were all to common words in the locker room as well.

The Hollywood Hills High School athlete was inspired by Jason Collins to tell his story.

Parents of gay teen athlete won't let him come out

After finding strength by reading Outsports stories on gay athletes, this high school athlete wants to share his story. Sadly we have had to remove his anonymous story out of fear that his parents, who are against him being gay, might see it.

One saying that has guided me through all of this: "It Gets Better." It's hard to realize that when you're stuck in the middle of the country hearing gay slurs every day. As I opened up my true self to people, I learned the power and truth of those three words. It's meant so much that I tattooed it on my arm.

As long as I could remember, sports have been a major part of my life. Ever since middle school I spent my summers in the weight room, falls on the field, winters on the court and springs on the track. There was just something about competing that I truly loved. To me there was nothing better then laying it all out on the field, court or track. Football was by far my biggest passion. I loved everything about it: the intensity, the hitting, the brotherhood of it all.

I had always pushed myself hard because I felt as if I had to compensate for being gay. This wasn't something just physically draining, but it took a mental and emotional toll as well. I was always so worried about making mistakes and letting down my teammates that it held me back as a competitor. After a while it all became too much for me to handle alone, so I decided to make a big change.

It was halfway though my junior year of high school. Years of holding in so much emotion was physically manifesting itself. My family and friends could tell something was wrong. I was constantly brushing off people's worries by saying I was just stressed about school.

One night I finally decided to tell my best friend, Aubrey. I was driving her home after a basketball game, and I told her I needed to talk. After that there was about a two-minute silence. I was so nervous that I couldn't stop shaking.

When she said, "I love you for you, this doesn't change a thing," it's like the weight of the world was lifted off my shoulders. It was something I needed to hear for the longest time. For the first time I had someone to confide in, and it was amazing. I decided to wait a few months before I told another person. 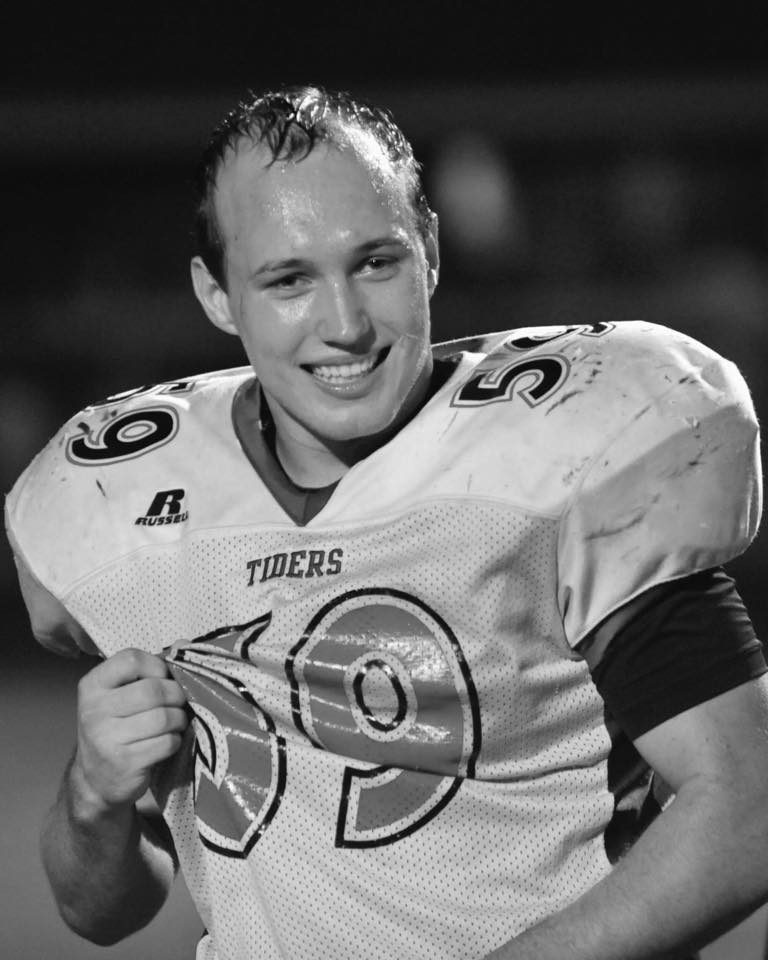 A lot of guys on the football team were also some of my best friends, which made me even more nervous about sharing this with them. I wanted to tell them one-on-one, and one of the most important was the quarterback of the team, who also happened to be one of my best friends, Brooks. I remember it vividly. We were having a causal conversation about the upcoming season. It was our senior year so we were extremely pumped. After a lull in the conversation I come out to him.

"No way," he said as I cringed. "Dalton I'm so happy you told me. Nothing changes anything dude. How long have you known?"

Months later, I had just gotten out of the locker room and was sitting on the staircase waiting for practice to start. As usual, I was stressing out about something - It was kind of par for the course. My buddy Chase sat down and we started talking about linebacker stuff and how great the upcoming season would be. Eventually Chase asked me what has been up with me lately - He, like so many, had noticed the stress.

I explained it all to him. The shocked look on his face was priceless. Just like Brooks, he reassured me that nothing would change and that he'd always be there for me. That season Chase and I were both middle linebackers and got all conference awards.

By the time summer came I knew I had two last people to tell: my parents. So I picked the perfect time to tell them: a party. We had just gotten back from my birthday dinner, the big 1-8, and we were all sitting in out living room.

"I'm gay," I blurted out after a short pause in the conversation.

"Is that all?" My mom said. She stood up gave me a hug, and that was the end of it. I was their son and nothing was going to change that, my parents love me still to this day unconditionally. 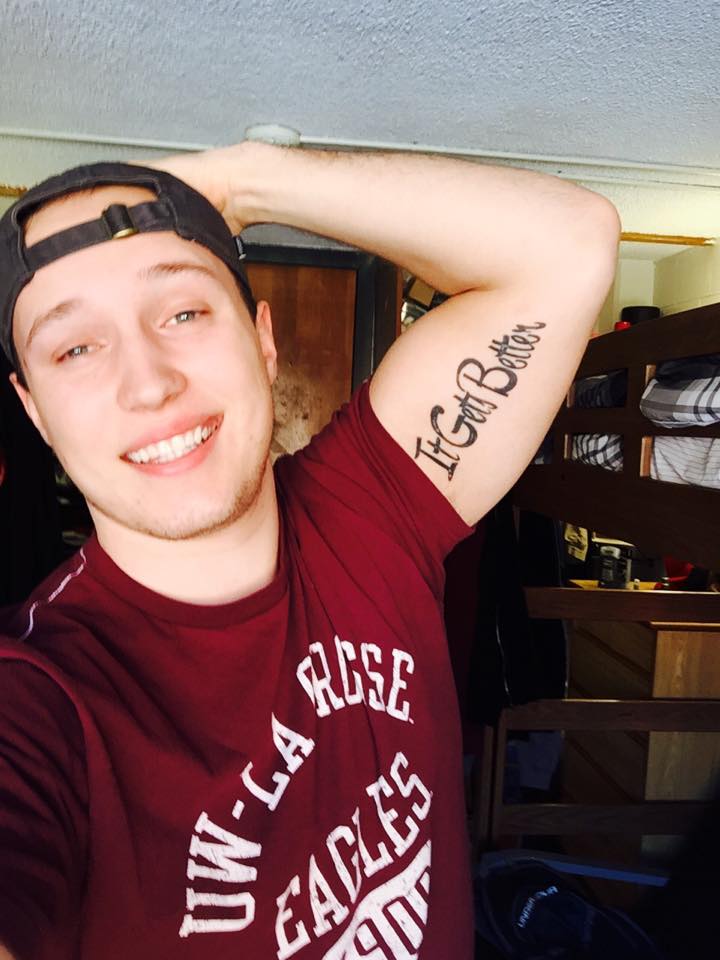 That senior year flew by. The football team had an undefeated conference season and made it to the second round of the playoffs, which hadn't happened in a very long time. I got an all-conference award for my position at middle linebacker. Track season went great too; I ran the 110 high and 300 intermediate hurdler. I was voted the president of my senior class.

After I graduated I started college at the University of Wisconsin-La Crosse. In many ways I went back "in the closet" when I got there. I don't really understand why I did, but I think I was just nervous about meeting so many new people. I wanted them to know me for me, not for me being gay.

For the first couple weeks of college, it was rough again. I felt as though I left a huge part of me behind. Thankfully it only lasted a couple weeks before I shared my "secret" with a couple of friends. Even just knowing them for a couple weeks, it was the same supportive reaction. That gave me the strength to make a Facebook post on National Coming Out Dayabout my sexuality.

This fear I had for so many years was finally gone. I was once the boy who told himself he was never going to come out; I become the kid who came out to everyone. I look back now, even as I type this, and am amazed at how far I've come. The support I've gotten from my family, friends, peers, teachers, teammates and couches has been unbelievable. I've also met so many amazing people in the LGBT community, and I have made some even more amazing friends.

You can reach Dalton Ray via email at dalton.leo59@gmail.com or on Twitter @DaltonLRay. It Gets Better can be found at itgetsbetter.org.