May I forever feel natural in Arkansas

Nora Cothren hid her sexual orientation from her family in Arkansas for years. When she finally told them about her impending marriage to her girlfriend, they embraced her. Now a proposed state law could bring back all of her fears about The Natural State.

Share All sharing options for: May I forever feel natural in Arkansas

Many of my best memories happened in Arkansas - The Natural State.  Growing up I spent at least a week every summer visiting my grandparents (Nana and Papaw) in Hot Springs, and then in Dierks where my family is originally from.

About 10 years ago my visits to Arkansas began to feel less "natural." This was around the time when I fully accepted that I am gay. Having spent so much time with my grandparents, their friends and other family members, I never thought I'd be safe being my authentic self in their presence. My visits to Dierks became more uncomfortable. I packed smaller, tighterclothes, and even played along with Nana and Papaw's attempt to set me up with the boy who mowed their lawn.

A cabinet next to Papaw's hospital bed in their home was covered in pictures of me, my sister, and my parents. Beside these were newspaper articles about my hockey games and the silly trading cards you get from team picture day.

And right next to the cabinet was the book "Hockey for Dummies." Raised in southwest Arkansas, ice hockey was not something familiar to Papaw, but he was always an incredible student. He picked up the game quickly and started cheering along side me for the Philadelphia Flyers. An avid Cowboys fan, one might assume he would follow that path and root for the Dallas Stars. He did not. He was a Flyers fan through and through, catching the bug from me. He watched the few Philly games broadcast in Arkansas, and we would talk about them afterwards. He sent me newspaper clippings relating to the minor league hockey team, the (now defunct) Arkansas Riverblades. I even got a Riverblades hat for Christmas. 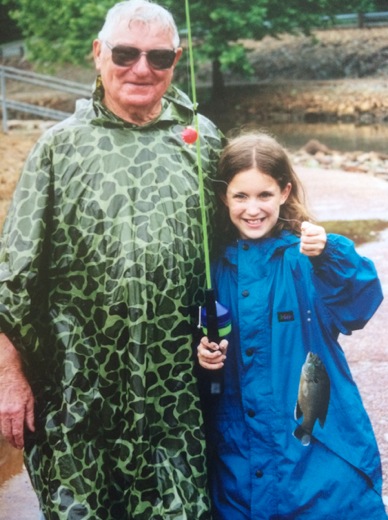 Papaw was the man who taught me how to throw a baseball at a young age, how to catch a fish, and introduced me to the Arkansas Razorbacks. He loved that I played sports and always wanted to be kept updated on my sports life. A few weeks before succumbing to his seven-year battle with cancer, in a very weak state, he was even able to follow me on a DVD recording of my senior year high school championship hockey game from his hospital bed. He'd say, "there's my girl," or "that's Nora, right?' as the tiny dots moved around the screen. Even at his weakest state he could tell it was me by the way I skated.

The name "Cothren" on the back of a jersey was extremely joyous for him. My father is an incredible man, but I did not get my athletic abilities from him. For Papaw, I was the athlete he had always craved. Once my game finished playing on the TV, he took me in his warm embrace - "love you good."

Papaw was my best friend. We spent hours sitting out in his barn looking over old photos, watching sports and talking. But one thing I couldn't share with him was my sexuality. I never thought Papaw would understand. I was terrified of losing this big love that enveloped me every time we were together and even when we were apart. I worried I would never hear him say "love you good" ever again. So I didn't tell him.

He passed away just a few weeks after I started college. Never telling him about who I am still sits with me today.

After a couple of years I built up the courage to tell Nana. I had been dating my now-fiancée, Liz, for a little while and felt the urgency to make sure she was able to meet this amazing matriarch of the family. Due to her heart condition, I was terrified to tell her. I didn't want to add "the homo who killed Nana" onto any possible titles I might be given after all this. My father asked if I would feel more comfortable if he told her, and I said yes. When he talked to her about it she just replied, "I can work with that." I brought Liz down to Dierks with me, and the two of them were immediately drawn to one another. Nana loved her. It helped that Liz loves sending cards.

I spoke with Nana after every Razorbacks game for the last couple years of her life. She asked about Liz every single time. I felt a bond that I would have never gotten had I not been authentic with her. She - a conservative, Christian, 90-year-old, born and raised in Arkansas - loved me for all of me. This gave me hope.

When Liz and I got engaged about a year ago, my sexual orientation was shared widely to all in the family.  There was no way to deny it now, and I was ready.

"Nora could never do anything to make us not love her anymore," Ronnie said through his tears. "That is the way God made her."

Not too long after that, my dad paid a visit to Dierks. I asked that he speak with his cousin, Ronnie (to whom I always felt very close) about the news of our engagement and what the reaction was in Arkansas. When my dad asked him if it would be safe for me to come back down there now that everyone knew. Ronnie began to cry.

"Nora could never do anything to make us not love her anymore," Ronnie said through his tears. "That is the way God made her."

I never could've imagined a reaction like this. It filled my heart with love and my eyes with tears. Today, a year later, he and his wife plan on attending our wedding this October.

The past few years have shown me hope.

Unfortunately this week I got a wake-up call via the Religious Freedom Restoration Act (RFRA), or HB 1228. After so much personal progress, I could be turned away from the hardware store in downtown Dierks that my family has owned for generations. I could be denied service at the stores where Nana and Papaw brought us to pick out toys. I could be turned away from a Razorback football game, or any hotel I might stay at in Fayetteville. All of this would be legal. Under the current form of this legislation, I could have been barred legally from attending Nana's funeral service in the local church even though Nana herself would have been the first one insisting they welcome me in.

Today Governor Hutchinson decided not to make a clear decision with the bill on his desk. Instead, he asked the legislature to recall the bill and give him one that aligned more with the Federal RFRA. I hope for the sake of all LGBT Arkansans that the legislature can see that the bill in its current state does not reflect the true nature of Arkansas and amend it to prohibit a route to discrimination.

This bill, in its current form, doesn't reflect the true love I have felt from people I never thought I'd feel that from. It hurts to see a place I hold so dear attempt to legislate discrimination of any kind. This bill would legitimize all of my previous fears, and I assume, those of LGBT Arkansans.

There is so much of Arkansas deep inside my soul, and I thank Nana and Papaw for showing me this. I send my love to all my LGBT brothers and sister in Arkansas who may be forced to limit their day-to-day lives due to this pending legislation. My heart is with all of you.

I know that the true Arkansan way is to love your neighbor as yourself. In the end - isn't that what is truly natural?

Nora Cothren is a superstar who works with GO! Athletes and the LGBT Sports Coalition. You can follow Nora Cothren on Twitter @NoLowCo.