The New York Gay Football League started as an idea in my living room a little over 10 years ago. Now it's one of the largest leagues in the country.

The New York Gay Football League celebrated its 10-year anniversary this weekend. Wrapped around the league's final regular-season games, organizers hosted a drag and rock & roll party, an "alumni" game that featured a healthy dose of wacky (and quite successful) trick plays, and the induction of the first class of the NYGFL Hall of Fame.

The NYGFL started as just a handful of people in my living room in West Chelsea, all of whom were looking for community and a physical outlet to embrace football. Five of them (below in the pic, L-R, Mike Colgrove, Tim Hughes, myself, Mike Pinelli and David Smith) returned for this weekend's celebration. 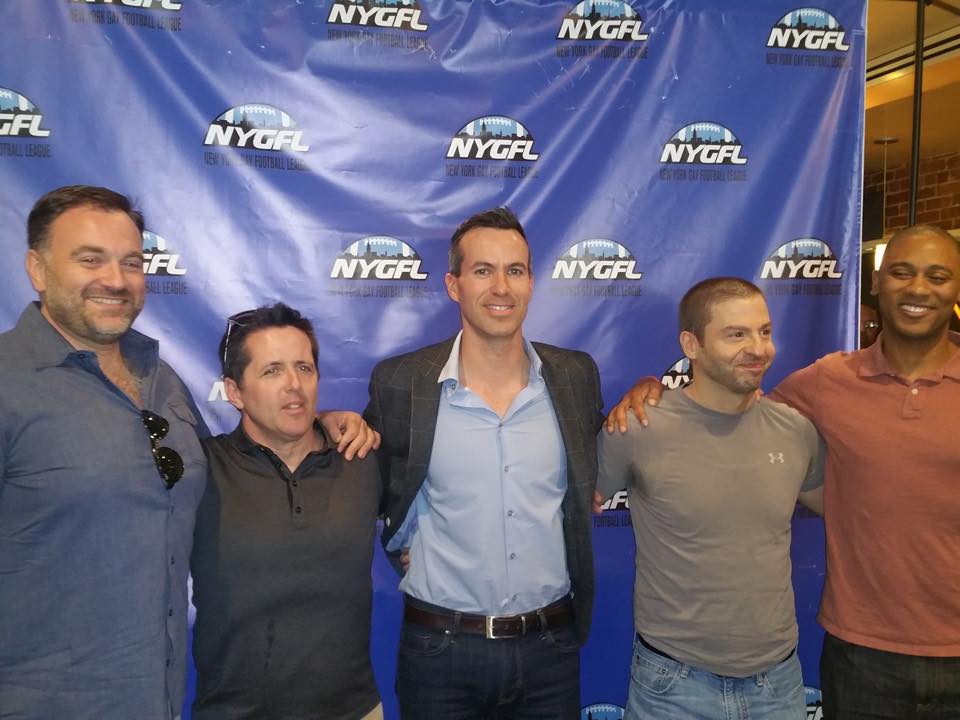 Several people asked me this weekend if I ever imagined the league would explode the way it did. From six teams in 2005, the league now boasts 20+ and has a wait list of a hundred more people eager to join. Truth is, none of us really thought about what the league would look like in 10 years, we were just doing what we thought was best for the day ahead of us. That included ensuring as much parity as possible, creating a system that thrust players onto a different team every season, and building an entire social scene around the league after the last whistle blew. Like so many sports leagues, we had no idea what we were doing when we dipped our toe into this world. Some of us had played softball or basketball, and I had played flag football in Los Angeles.

Quickly that initial group was joined by scores of people looking for a good time. It's amazing how many people have come through that league, including New York City Council member Corey Johnson, actor Scott Evans, You Can Play's Wade Davis, drag diva Jackie Dupree and so many more. Countless others have stepped up to raise money, create social events, referee, captain teams and so much more, it would be impossible to effectively list them all here. Yet from day one, we have all worked together as a team to build one of the most special LGBT sports leagues in the world.

The NYGFL has become a beacon for the diversity reflected in the LGBT community. Just about every walk of life has passed through the league, from drag queens to college athletes, people of every race and gender identity, and yes a healthy dose of straight people. It's also grown as an example of excellence, as the NYGFL was the first ever to win three straight Gay Bowls, finishing in the top four seven times in 10 years.

My friend, former teammate and current NYGFL commissioner Rory Ray inducted me with a very kind intro. It was fitting, having been on both sides of the ball during games with Rory, and given his strong behind-the-scenes contributions to Outsports over the years, that he would be the person to induct me.

When we wanted to start the NYGFL in 2004, several people told me it was "impossible." Others had tried before, but it just couldn't get a foothold in the bustling LGBT New York life. For lots of reasons, this time it stuck.

Like I said in my short (yes, I kept it short) acceptance, the NYGFL has meant a lot to a lot of people. What it taught me the most over the years was the importance of teamwork. Nothing can be accomplished in life without a team, each person accepting their role on the team and executing it to the best of their abilities. Somehow in the NYGFL, from the organizers to the players, the referees to the traveling New York Warriors, people have for the most part willingly been part of the team. That is what has made the league so successful.

I'll never be part of another gay sports league as special to me as the NYGFL. It filled an important role in my life shortly after I moved from the comfort of Los Angeles in 2003. It's impossible to adequately thank everyone who made my four years with the NYGFL some of the best of my life, yet I will be forever indebted to them.