These Div. 1 swimmers love their gay teammate, go to him for fashion advice

Ayrton Kasemets just finished his freshman year in college, all of which he was out to his team as gay. Now he's the team's go-to guy for fashion advice.

Share All sharing options for: These Div. 1 swimmers love their gay teammate, go to him for fashion advice

I didn't have many close friends at my high school. All of my friends were through swimming, but they went to different high schools. All of them knew I was gay. I found it more important that my personal and close friends knew more than anything else. I didn't need to or didn't want to advertise it to the folks at my school.

The only person I really was nervous about was my dad. Funny enough, I didn't get to choose the timing of my coming out to him because he straight-up asked me. We were making a very manly and casual drive to Ace Hardware when we saw what appeared to be a same-sex couple walking on the street.

"It's funny to see them walking out in public," my dad said.

I muscled the courage to not stay silent.

"They can like whoever they want, and so can you."

Arizona swimmer came out. Everyone shrugged.

Jon Denton-Schneider used all sorts of excuses to avoid coming out, but realized that being a good teammate meant being honest.

Texas swimmer comes out to team in this email

Junior Matt Korman didn't want to hide this side of himself any longer -- and he wanted to date openly. Read the email he sent to his team.

Arizona swimmer came out. Everyone shrugged. Texas swimmer comes out to team in this email

Thankfully we had to get out of the car and go into the store. The awkward unanswered moment lasted until we got back into the car.

He game me the typical - and very much welcome - dad answer with a "well what can I do besides love you?"

My parents haven't stopped loving me, and I will love them until the end of time because of it. They have stressed to me many times that it doesn't matter who I love, but that one day I will get to love someone.

Like I said earlier, I never really came out publicly to a whole group of people before. When I got to Oakland University, I knew that I needed to address the issue with the team as a whole so it would take away all the talk and the gossip. There was still very much of that when most of the girl's team decided to be my best friends from the moment I stepped on campus. Some how they knew. Ha. I love the girls for it.

The very first weekend on campus at a team event, the two senior captains pulled me aside. They were very hesitant, dancing around the issue.

They very politely asked if I was gay, and I told them the truth. They had absolutely no problem with it. It was very refreshing. The thing they were worried about was how comfortable I was and they wanted to make sure that I was comfortable addressing the team. 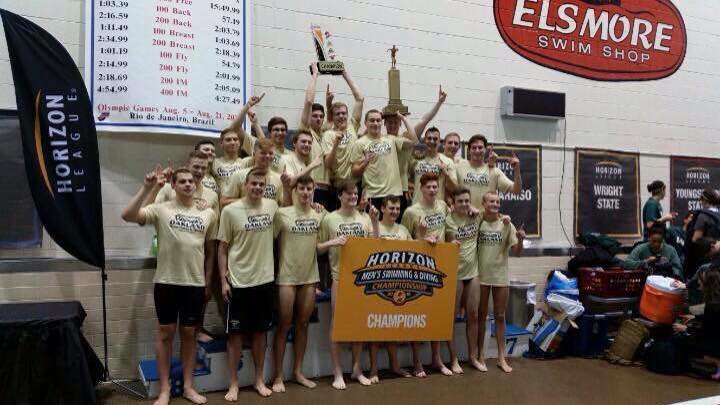 One of them even told me that they had a gay uncle, which let me be more comfortable with him. They offered that the best time to come out to the team was the next weekend when our team was going to go on a team trip to that same captain's cabin. Everyone went around the campfire and told an embarrassing story, but when it was my turn, I told them with full pride and confidence that "I am gay."

Instantly I was surrounded by support. Despite some very odd questions at times from my teammates, I love them all for it because I know they care about me and show their comfort level. I am so thankful for my team because they give me support in times that I need it and allow me to be my complete self.

"I've never had any concern over having a gay teammate," senior captain Mitch Alters told me as I was writing this story. "We want everyone to fell welcomed and comfortable. That's the atmosphere we want to create on our team. Be who you want to be, and be happy!"

Some of my favorite highlights from my freshmen year of being openly gay is the "fashion" stigma surrounding gay men. I like to think of myself as a guy who dresses nicely. I like to look good. Whenever any of the guys see me during the day they always compliment me on what I am wearing. I feel like most straight guys would be uncomfortable to compliment another guy on their looks, but it is quite the contrary. They seek me out for my advice on fashion.

I have been a part of this wonderful program for a year now, and not once have I felt a moment of discrimination. Everyone from the student body, other athletic teams, coaches, and my teammates have supported me. I know that I am lucky to be in a place where everyone accepts me. I feel very comfortable at school and can't imagine being anywhere else. I am proud to be part of such an accepting team and institution.