Gay Pac-12 referee has been with his partner for 29 years. Now he's coming out to help others.

Steve Strimling says being gay has never stopped him from advancing as a football official. Now a white hat referee in the Pac-12, he wants to come out publicly to help others.

Share All sharing options for: Gay Pac-12 referee has been with his partner for 29 years. Now he's coming out to help others.

After over 30 years in the business, the widely respected Pac-12 football referee has reached a pinnacle in his officiating career. He is a successful businessman in the footwear industry. He has been with his partner, real estate agent Michael Syre, for almost three decades, ever since the then-twenty-somethings met in the San Fernando Valley in the Eighties.

Already on ESPN and Fox Sports every autumn Saturday, Strimling certainly doesn't seek some form of notoriety as a gay referee in football, America's most powerful cultural institution.

Instead, he just wants to help.

"I don't need this," Strimling said over a cup of tea at Blue Bottle Coffee near his home in Los Angeles last month. "I don't need anyone to tell me, ‘great job.' I think most people I work with know about me. It's not an issue now, and it won't be an issue later.

"This is about people telling me that it might help someone else. The articles I read about other gay people in sports each say how much they helped others. That's why I want to do this. I want to help."

For those who know Strimling simply as a successful football official, his desire to help other people will be of no surprise. Not content with simply advancing his own officiating career, Strimling has made helping other officials advance in their on-field pursuits part-and-parcel to his own success. Strimling is the educational chair of his local high school unit, drives over an hour during the season to run a weekly in-season class for college officials, operates a weekly offseason class aimed at improving rules knowledge, and throughout the year is a staple at various camps and clinics where he sometimes gets his travel costs covered.

Helping others is an inextricable element of Strimling's character, even if he is also incredibly adept at deflecting thanks and praise.

"We should be judged by how well we perform in games. If someone loses assignments because he's gay? I'll make whatever phone calls I need to make. That can't be happening.

"Guys like [NFL linesman] Patrick Turner have been very helpful to me, so when he or other people ask me to help, I just say yes."

Though he's lived all his life in the Los Angeles area, Strimling has worked across the country as a football official, starting in stripes when he was 12. In 1982 he got his first crack at the college game, working junior college and then NCAA Division 3 in Southern California. After an 11-year "break" from officiating, he landed a gig with Arena Football and was hired by the WAC in 2006. The Pac-12 came calling six years later. He was moved to the referee position - a crew chief - for the 2015 season.

Through it all, being gay hasn't held him back from advancing as an official.

"I've never thought being gay was hard for me at all. It's never interfered with anything I've done at home, at work or my officiating."

While he has, at times, not "advertised" his personal life to fellow officials, he's never lied about it. On officiating job applications, like the one he filled out for the Pac-12, he's always said he isn't married, he has a kid, and that Michael is his emergency contact. Michael and his son, Zach, have traveled with him across the country throughout his career, whether it's been a drive up I-5 to Fresno or a big road trip to New Orleans or Hawaii. On a recent trip to the Univ. of Notre Dame, Michael was just another "spouse," slipping in adeptly with the wives of the straight men on the crew.

"Everybody knows about Michael and Zach."

They have been, as far as Strimling is concerned, just another American family with a home, a dog, problems and love. 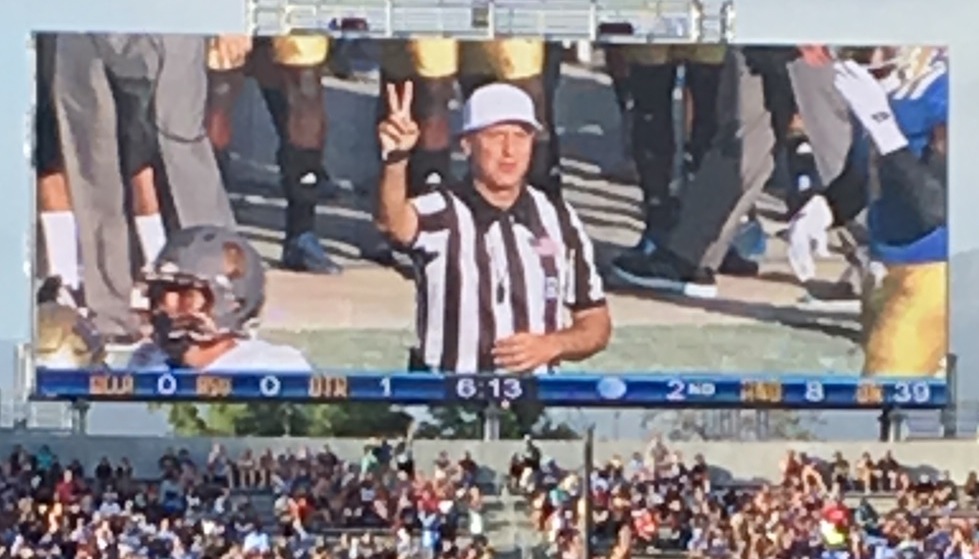 "I always knew that Steve was a good official, but I underestimated his ability as a referee. Fox covered his first game as a referee in the Pac-12, which just happened to be Michigan at Utah. It was Jim Harbaugh's first game at Michigan. I would not have assigned Steve or any other referee who was going to call his first game to a matchup this critical that was going to be on national television. I questioned the logic of the Pac-12 for doing this. Well, was I wrong. Steve performed like a seasoned veteran referee both in the way he prepared his crew and in his performance on the field. He had a great game and he proved to me that he was going to be an outstanding referee for a long time."

Strimling carries himself with a deep self-confidence that has freed him from the fears driving so many other gay people in sports from sharing their true selves. It's also part of what makes him a rising star in the profession, prompting former NFL head of officiating Mike Pereira to tell me Strimling will be "an outstanding referee for a long time."

If he has failed to receive certain opportunities over the years, Strimling would never point to his sexual orientation as even a small reason for it.

"The only thing that stopped me in officiating was really me, my temper and my anger," Strimling said of his departure from college football from 1989 to 2000. "I was always flagging coaches and throwing people out. I got back into college because someone said, ‘Your talent is good enough, but you're an asshole. Get rid of that part and I'll help you.' So I changed my officiating, and it changed my home, it changed how I do stuff at work.

Still, Strimling understands that his experiences - largely free from homophobia - are partly a byproduct of living in Los Angeles at a time when society's perspectives of gay people are changing rapidly. Last year Outsports ran the story of a closeted gay high school and college official in Louisiana who had seen and heard brutal homophobia from fans and his fellow officials. Other gay officials at some of college's highest levels have shared with me a fear of losing assignments if they talk about being married to their husband.

While Strimling -- never a "West Hollywood, go out to the clubs kind of guy" -- has certainly heard homophobic language on the field and in the locker room over the years -- "that's how guys talk" -- he personally will not tolerate other gay officials losing opportunities because of who they are.

"If something like that happens, they can know I'll be there to stand by them. We should be judged by how well we perform in games. If someone loses assignments because he's gay? I know people in officiating across the country. I'll make whatever phone calls I need to make. That can't be happening."

It's far from a hollow promise. Strimling has access to some of the titans of football officiating like former NFL head of officials Pereira and Big Ten director of officiating Bill Carollo. Strimling also has a track record of embracing diversity on his crews. His crews in the WAC and Pac-12 have welcomed officials of various races. One of the few women in big-time college officiating, Cat Conti, was on his crew last season.

He's also been a respected official for years, and that respect is expanding rapidly since becoming a white hat in the Pac-12; Seven of the eight members of his crew this season received a bowl assignment (including Strimling, who has worked a half dozen bowl games over the last decade), as did his two replay officials.

Striving for excellence and success have been part of his passion for officiating from his first days taking the field. You don't get to where he is without them.

"College football is a big societal event, and I'm part of it. It's part of why I love officiating. To most fans, officials can only screw it up, so I love that I can go out there and not screw it up. So far I haven't had an ESPN SportsCenter moment. Being part of it, being good at what I do, doing what I do at the very highest level. I want to be at the highest level possible."

Over his three decades of officiating, that has translated into a lot of time away from his family both physically and mentally. Reaching the apex of football officiating takes exponentially more work than the general public will ever realize. In addition to his personal preparation and travel for games, Strimling organizes numerous opportunities for others to learn, holds regular meetings with his Pac-12 crew and with other Pac-12 officials, works various camps and clinics during the offseason, and has made studying the rulebook an artform, able to recite the NCAA football rulebook word-for-word. 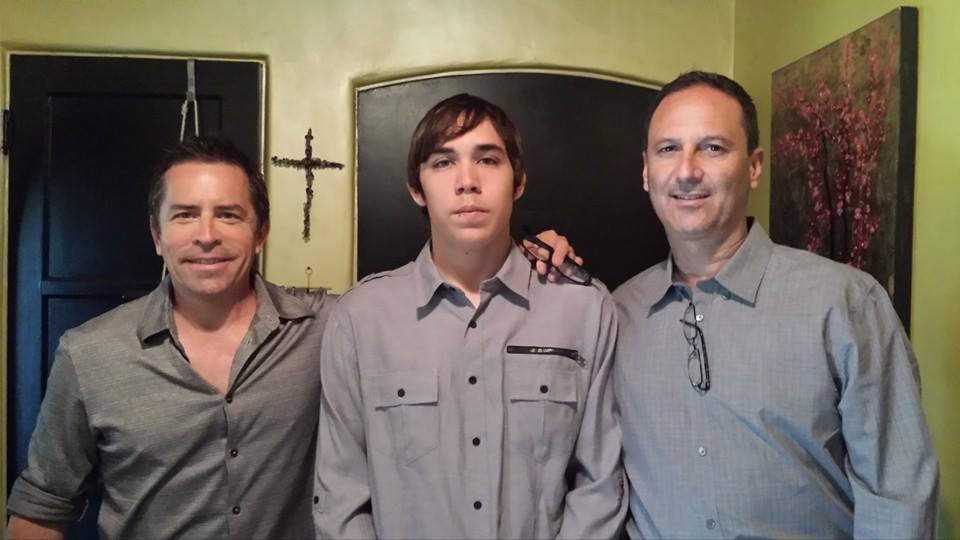 "Michael and Zach had to sacrifice because, between my work and this, I was gone so much. We have family issues because of that, just like any other family. That's not because Michael and I are gay. To get where I am in officiating I thought I had to do certain things, go to every camp.

"There were times when I put more into my officiating than I put into my family. Officiating is, to an extent, my personal life. I don't have friends outside of officiating. My family still comes first, but at times officiating is almost my whole life."

He knows there may be a slight hiccup around a handful of his fellow football officials after talking about this publicly. While plenty of people in officiating know about his family, he understands there are still pockets of football where gay people are not completely understood. He also knows that a slight hiccup is about the worst he would possibly face.

"Will there be a couple things? Maybe. I go to Pac-12 events, and there are still people I don't know who they are. There will likely be a couple who are absolutely religious and who will have a problem. But I can't see how today they will be able to stand up and make it an issue. They may never want to see me again, as soon as the meeting's over they may not want to have dinner with me. Today it might be one out of 20. That's fine."

Strimling spent part of last night again with his officiating friends, again away from his family, again working with younger officials in Los Angeles to understand the rules and about a dozen recommended changes to the rulebook for 2016. Some of the men in that room will be surprised to read this story this morning, others will know this is just Strimling again trying to help.

"I think we're getting close in certain areas to this not being an issue anymore," Strimling said. "But I guess it is still an issue in some places. So if this helps, I'm all for it."

Steve Strimling is not on social media. You can reach him via email at stevestrimling@yahoo.com.