With glassy eyes, my dad sat me down at the table. "PJ, you know I will always love you no matter what," my dad said. "This doesn't change who you are nor does it make you any less of a person. I am proud to call you my son."

Share All sharing options for: Despite fear, young gay rodeo cowboy came out to open arms in rural South Dakota

Growing up gay in a rural ranch community made me who I am today.

The ‘struggle' I speak of was an internal battle so fierce and destructible I was frequently left with severe nausea. I hated myself on a fundamental level. Before I could face my peers every day, I had to face myself. Perhaps the worst part was not being able to talk to anyone about it, not even my best friend. Even if I trusted someone enough to carry the secret capable of ending life as I knew it, I couldn't say it out loud. Saying it out loud would make it true. "I'm gay." I wanted nothing more than for those unspeakable words to be false.

I was the only son born to a fifth-generation ranching family in rural South Dakota. The nearest town had a population of 400 people and was a 25-mile drive on mostly gravel roads. Life was simple. I loved the ranch and my family — I still do. As a toddler, I wanted to be exactly like my father when I grew up: go to college, marry a wife as perfect as my mother and have a family of my own.

Of course we would rodeo, because that was what my family did.

That hope was dissipated when the first signs of being gay started to surface in the back of my mind before I ever even hit puberty. Of course I had no idea what it meant at the time. In high school I had my first crush, which I cast off to be nothing more than looking up to one of the star athletes. The feelings were not welcomed. I distanced myself from almost everyone, which proved difficult while competing in football, basketball and rodeo.

Convincing myself I was an independent person, I focused solely on what I could control: grades and respect from others. Respect was vital for me because I had little respect for myself. After all, I was raised to think being gay was detestable and an abomination.

Jesse Taylor comes from a small town in South Dakota. He came out privately for the first time a year ago Saturday. Now a year later he shares his story in hopes of connecting with athletes struggling with their identity.

W. Virginia athlete came out to stop the slurs

Chad Walker heard gay slurs on the Potomac State College of West Virginia University cross-country team. But when he came out as gay, his team embraced him.

Perhaps the worst struggle came from hearing my family and friends mock gay people. I would laugh at their jokes and pretend to agree with them when they made derogatory statements. On the inside I swallowed my heart along with the terrifying thoughts that I might be gay.

Each joke, each disapproving comment, each use of the term "fag" chipped away at my inner core. I became a master at bottling my true feelings. I always smiled to mask the emptiness and self-loathing. Over time I grew to hate myself on a fundamental level. The pain was endless. Even worse, I couldn't express the pain, because crying over it would make it real. The way I saw it, I only had two options: kill myself or force myself to be straight.

Despite my inner struggles, I have always been an optimistic person. Suicide was not an option for me. My mom is the kindest person on this planet — I could never leave her and the rest of my family and friends by taking my own life.

So I convinced myself I was straight. Dating girls was not difficult; I really had nothing to lose. Coincidentally, I was a terrible boyfriend because I just did not care if the relationship succeeded. Although I loved my college girlfriend, it was an empty love. The physical attraction was not there. She deserved better — she deserved a guy who passionately loved her, and I would like to think she found that. I had no other serious girlfriends after her.

At about the same point in my life, my doctors discovered a life-threatening tumor. The tumor was the size of a deflated basketball intertwined with my abdominal organs. At the risk of being melodramatic, I was unsure if I would survive. As much as I was unafraid of death, seeing what my family and friends went through was terrifying. The copious amount of love and support was shocking and life-changing. The entire experience made me see life from a different angle.

After surviving my tumor scare, I started to reconsider the lie I had been living. At 21 years old, I was able to finally admit to myself for the first time — "I am gay." 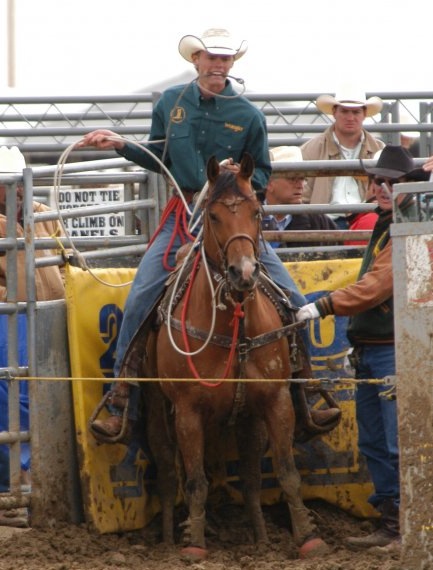 The internal surrender relieved the worst of my pain. Yet coping with this new burden was no easy task, especially while attending a small university in Western South Dakota where the only openly gay people were turned into outcasts. It was easier for me to continue life as it was and suppress my inner thoughts. The captain of the rodeo team can't be gay — cue the Brokeback Mountain jokes.

I redoubled my scholastic and extracurricular efforts. For me the only way to cope was to excel enough in the classroom and intercollegiate rodeo to secure postgraduate opportunities.

My final year of law school at the University of South Dakota was a challenge. After an internship in Louisville helped me explore my true self away from my home state, I could no longer hide it from my closest friends. The first friend I came out to did not handle it well. She used Christianity to defend her position against "the lifestyle." Although she was still nice and continued to be my friend, her reaction had triggered inner turmoil I hadn't felt for years.

As I came out to other friends they all seemed to handle it surprisingly well. Even my roommates seemed to be OK with it.

I had decided I would tell my family after I took the bar exam because I would be spending two months with them and it would allow time to mend any potential broken bonds. The anxiety of coming out to my parents was severe enough to prevent me from eating. I had to tell them, I couldn't keep lying to them as to why I was still single. When I arrived home I didn't unpack my bags from my car; I needed to be flight-ready if coming out ended poorly.

My mom begged me to keep it from my dad for a little longer, but I couldn't live with the anxiety any longer. My dad is a weather-hardened rancher with conservative viewpoints. I anticipated the worst.

What I failed to take into consideration about predicting my dad's reaction is how well-read he is and how much compassion he has.

With glassy eyes, my dad sat me down at the table.

"PJ, you know I will always love you no matter what," my dad said. "This doesn't change who you are nor does it make you any less of a person. I am proud to call you my son.

"My only regret is that you won't be able to have the traditional family I was lucky enough to have. With that said, I want you to know that I will fully support any decision you make to adopt, foster, or hire a surrogate for you to have your own children. I want you to experience that someday because it has been the most rewarding experience of my life.

"Now, why don't you change out of your dirty work clothes so we can go to the Deadwood casinos."

It's odd how the day I dreaded the most turned out to be the best day of my life.

With my dad's support I told my older sister, my cousins, and few other family members. Some of the best support came from some of the people I expected it least. I will forever be appreciative of my two brothers-in-law, who both have been incredibly supportive.

Looking back, I can't help but to think how different my life would be had I grown up in a more accepting world. Consider how daily remarks may affect others before speaking and strive to impact the world in a positive way. Society attempts to force all youth to conform to its notion of normalcy.

To those fighting the same battle I did, do not let ignorance, hate, or negativity prevent you from being the best person you can be.

It will get better.

Paul J. Painter ("PJ" or "Riley") decided to share his story as a result of recent proposed legislation in South Dakota that was recently vetoed by the governor. He spent the first 25 years of his life in South Dakota and is proud to say he is from the Rushmore State. He attended Black Hills State University, where he majored in professional accountancy while representing BHSU in the National Intercollegiate Rodeo Association. After graduating near the top of his class from the University of South Dakota School of Law in 2013, he moved to Louisville, Kentucky, and currently practices as an attorney for Quintairos, Prieto, Wood & Boyer, P.A., recently listed one of Louisville's top law firms by Business First. PJ donated his time to write an amicus curiae brief on behalf of the American Civil Liberties Union of Kentucky supporting the gay plaintiffs in the Kentucky gay marriage case, Love, et al. v. Beshear, 3:13-CV-750 (W.D.Ky. 2014). Aside from competing in occasional rodeos, PJ also competes in AVP and AVPNext beach volleyball tournaments across the nation.

You can find PJ Painter on Facebook and on Instagram. You can also email him at pj_painter@yahoo.com.