Colin Shaw came out to his teammates a few years after leaving Wagner College. Now he plays with them again, just another one of the lax bros.

Share All sharing options for: Straight lax bros greet gay teammate's coming out exactly how they should

This past weekend I traveled from Phoenixville, Penn., to New York City to play in a lacrosse tournament on Randall's Island. This weekend also happened to be Pride weekend in New York, and being a gay lacrosse player it felt like a two-for-one deal.

I am a 27-year-old gay man who has accomplished a lot in his sport. I played NCAA Division 1 lacrosse for four years at Wagner College, from 2007-2011. During my college career I played all 59 games in all four seasons. In 2011, I was named first team All­Northeast Conference as a defenseman, and with that award I became the first player in program history to receive first team all-conference honors. Although my team's overall college record was 2-57, I have zero regrets on my choice of school or team. The coaches and teammates I had from my time at Wagner are the greatest group of guys anyone could ask for.

I came out to my family in November 2014, and shortly after that I came out to my former college teammates. At the time I was 26 years old, living in Durham, England, and was finally ready to come out. Although I was 26 when I came out, I realized I was gay when I was 12 years old. I still remember the day I realized I was gay, because of how terrified I was at that time. The response from my family was great, and they are extremely supportive of me.

Things 'so much better' for 13 y.o. gay lax player

Kyle Martin coaches at the same high school he attended and considers himself lucky for the support he has received.

My teammates said very similar things that my family had said, but they did something that made me feel like nothing had changed for them: They immediately ripped on me for everything from being gay to living in England. The last thing I want is to paint a picture of a group of bigoted lax bros, because that's not what they are. If they had reacted in a politically correct way, that would have been the worst reaction. We were never PC with each other, and if I was going to be who I was, they needed to be who they were to prove that the brotherly bond we had was as strong as ever.

I had sent my coming-out email to my college coach, Jason Rife. I sent it to Coach Rife because of how he helped me become a man. Coach Rife one of the hardest men I know, but at the same time he is also the most caring and compassionate. His response to my coming out brought me to tears. Although I will not share the email, I will say that his words were powerfully guiding, comforting and supportive in a way that followed his guidelines of being a "man." People throw around the term "unsung hero" a lot, but what Rife had done for me with one email was heroic.

Back to New York City this weekend. I made it a priority to play in the lacrosse tournament this weekend, because it had been over a year since I had seen any of my teammates, and that is far too long not to see people you love. The team I play for now is called The Budmen, after the Budweiser cartoon superhero. The Budmen consist of guys who played at a ton of different schools in college, made up mostly of guys who played at Wagner (the last place team in the NEC) and Bryant (the first place team in the NEC). I love playing with the Bryant guys, because they are good players and great human beings.

After we had lost our semi-final game on Sunday I headed back to Manhattan with two of the Budmen, Cody (Wagner and Bryant) and Nils (Bryant). 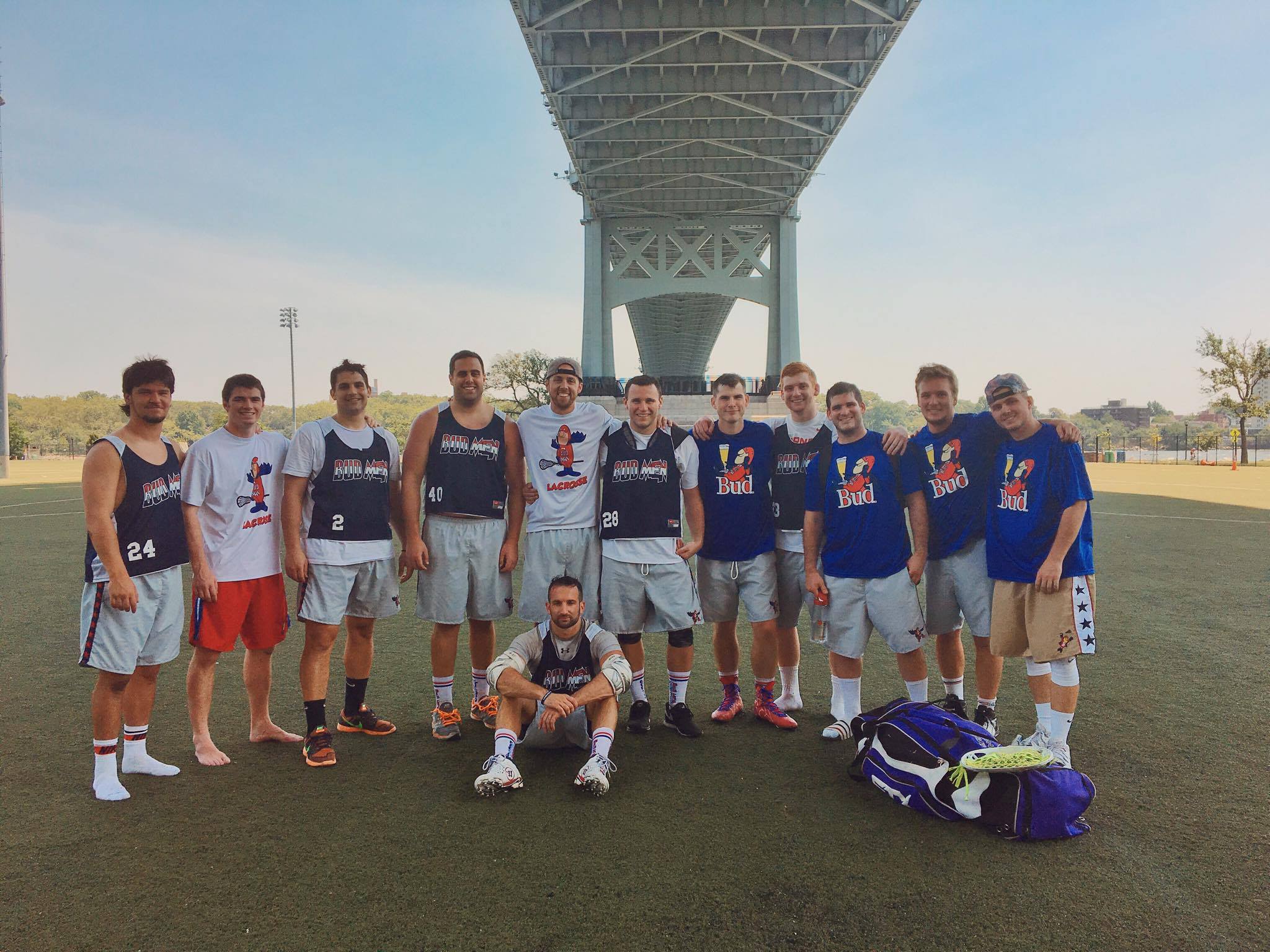 Eventually that afternoon we headed to the Pride Parade. We stuck around for almost two-and-a-half hours standing there sore and stinky having fun at the parade. That moment this weekend was a powerful display that two D1 men's lacrosse players could be there to support their gay teammate.

I was asked to write this article about a month ago after the Courage Game, and I had written a couple of other previous drafts that all sounded more like an essay than an article about my experience. I am glad that I didn't submit any of that, because I know that the point would not get across. You see a ton of hate for the LGBT community, but the fact is that there is far more love for LGBT people. People show that love in different ways, whether it's waving a rainbow flag on Fifth Ave. or giving crap to their teammate living in different country.

It is my hope that a 12-year-old struggling with the fact they're gay comes across this and it gives them the confidence to own who they are. Staying in the closet for 14 years was the biggest regret I will ever have. I know now that people who truly love you will love you no matter what.

The people who have a problem with it? They suck, and you don't need them anyway.

Colin Shaw played lacrosse for four years at Wagner College. He's now a lacrosse coach at Phoenixville Area High School in Pennsylvania. You can find Shaw on Facebook. You can also reach him via email at colin.shaw@wagner.edu.