Once blackmailed by a soccer teammate, Bryson Jones is now out and proud at the Big Ten

When Bryson Jones' teammate blackmailed him for being gay, the Mercer Univ. soccer player contemplated suicide. Now he's out and working for the Big Ten conference.

Share All sharing options for: Once blackmailed by a soccer teammate, Bryson Jones is now out and proud at the Big Ten

If you're an LGBT athlete struggling to find support, contact the GO! Athletes Mentorship Program.

On November 1, 2010, I sat on my couch in my college apartment alone, trying to muster the courage to swallow a bottle of pills.

"How did I get to this point?"

A series of unfortunate events had led me to this, the lowest point of my life, contemplating suicide and within a turn of my hand of taking action.

I was in preschool when I first realized I was different. My best friend was a girl named Elizabeth and we always would have play dates. I'd play with her dolls. She'd kick the ball around with me. We just truly enjoyed each other's company.

Her birthday was coming up and she was having a princess party. I was the only boy invited. Of course, I wanted to go. Who would want to pass up a good princess party? She was my best friend and I knew we'd have fun together, but it was a conversation between my parents that made me realize something was wrong.

"He's not going to a party for girls," I heard my dad say.

The Bucknell University player writes an open letter to people who still see being gay as wrong, a choice or immoral.

Both the Univ. of Kansas and Kansas State have been blessed with the transformative power of soccer coach Jessica Smith coming out and being out as a gay coach. She is living proof of the power of courage.

My mom was not having any of his mandate, sticking up for me and my best friend. I felt backed into a corner at the tender age of five when my dad asked me if I wanted to go.

"I don't want to go to a stupid princess party," I exclaimed.

And that was that.  I didn't go to my best friend's party all because I didn't want to disappoint my father. From that day on I suppressed any feeling that wasn't "normal."

Athletics was always a huge part of my life. I fell in love with soccer early on and continued to play through college. I loved the feeling of camaraderie and family that playing soccer gave me. I was lucky enough to receive a scholarship to play soccer at Mercer University. It was there that I would experience the highest of highs and the lowest of lows.

I had the best teammates in the world. I loved them all. We were family. Together we experienced so many challenges athletically, academically and socially, but we all came together to help each other out.

Unfortunately what I needed help with the most - coming to terms with my sexuality - I felt I couldn't share with them. I'd always known I was gay. I was never interested in girls and never showed any semblance of attraction toward them. I didn't have girlfriends. I never dated anyone. I figured if I ignored it, I could fly under the radar.

Until college, I had never showered in a locker room. In high school, I'd always do the quick-change with my head down, trying to make sure that I never so much as glanced in anyone else's direction. I didn't want anyone to think I was looking at them weird, so I avoided it all together.

This was unavoidable in college. There was no such thing as modesty in the locker room. People were made fun of for showering with the curtain closed. Despite the gratuitous nudity and the occasional towel slapping, gay slurs were dropped on the daily. This made me suppress my inner feelings even more.

I did not want to be "the gay kid" in the locker room. I just wanted to be another one of the guys.

After having a successful freshman season, sophomore year brought me to new lows. I went from being a starter to getting injured, being on the bench and not traveling with the team. I felt like I was not a part of the team anymore. My depression hit an entirely new level of complexity. The one thing that made me happy wasn't making me happy anymore.

This brings me back to that night in 2010 where I almost ended it all. The day before was Halloween, my favorite holiday of all time. Halloween has always been a way for me to escape what I was hiding and be able to be whomever I wanted.

A teammate hosted a party at his off-campus house, and I went as Antoine Dodson of "Hide Yo' Kids, Hide Yo' Wife" fame. Everyone had a great time.

We went downtown afterwards and continued the evening. It wasn't until the next morning when I went back to get my car that I realized it had been broken into. I had several things stolen, and one of my teammate's backpack was taken from the trunk of my car. This particular teammate had found out that I was gay the night before by reading text messages on a friend's phone.

Upset that his expensive hiking backpack was gone, he threatened to out me to my team if I didn't pay for it. Backed into a corner I did what I thought I had to do and I bought him a new backpack, even though it wasn't my fault it had been taken.

The fear of my teammates finding out I was gay scared the life out of me. I no longer had control over who knew my secret. My biggest insecurity was now in the hands of someone who was willing to use my sexuality against me as blackmail.

It wasn't worth it. The pain that I would have inflicted on the ones I loved - my family, my team - was not worth it.

I decided my life was worth living. 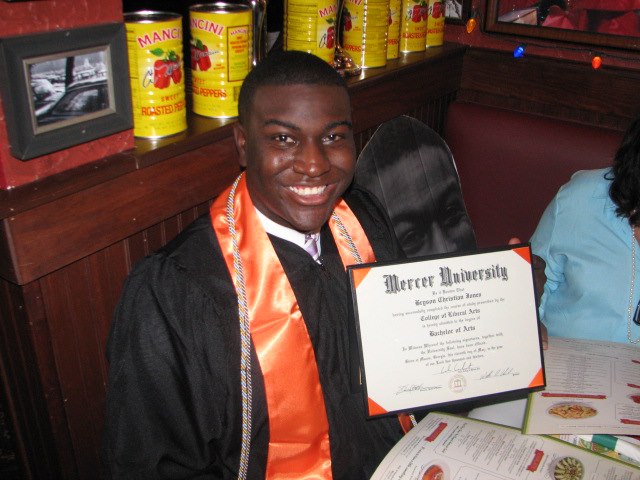 In the years following, I continued to keep my sexuality a secret. Whether I was successful or not, who knows, but I stayed quiet until I graduated. After graduation I moved to Blacksburg, Va., to begin a career in college athletics at Virginia Tech. This would be the place where I would find myself and a group of friends willing to accept me for who I was. For the first time in my life, I was able to be completely and undeniably me, even if it was just with a small group of tight-knit friends.

It wasn't until a year after graduating from Mercer, when my teammates and I were back in town for a wedding, that I came out to most of them. It didn't come as a surprise to many (I had come out of the closet as a Beyonce and Lady Gaga fan far before I came out as gay), and they were all very accepting. Some were even apologetic for moments in the locker room or on away trips that may have made me uncomfortable.

One teammate in particular called me on my drive back to Virginia with so much remorse for ever making me feel uncomfortable or unloved. I pulled over and sobbed after that phone call. One of the people I was most fearful of coming out to loved me for me. I'll be in his wedding in February.

I would continue to come out little by little, mostly finding acceptance with very little rejection wherever I went.

My family was the last group of people I told. I grew up in a Christian home, and I always knew this would be my biggest hurdle in life. I told my sisters first. I guess my mentality was to rally the troops before I decided to tell my mom.

I didn't have to.

My little sister has the world's biggest mouth and can't hold a secret. I knew she'd probably call my mom right after the conversation. Ding ding ding. The next day I get a text from my mom.

I continually think, "is there a need to hide myself from the world anymore?" I truly don't think there is.

"There is nothing in this world that can separate you from the love of Christ or your momma."

Those simple words instantly made me know I was accepted.

In July of 2015, I accepted a position as the assistant director of communications at the Big Ten Conference in Chicago, Ill.

After attending the Outsports Reunion in Chicago and meeting and hearing all the stories of amazing people who have overcame the same obstacles as me, I felt compelled to tell my story. I no longer want to be quiet. I want to help be a voice and sounding board for LGBT athletes across the country.

It is by no means easy being gay in today's society, especially in the world of college athletics. Being black and gay adds another entire level of difficulty, but I've been getting through it. Since graduating, I have tried to carefully navigate my professional life within college athletics and my personal life, purposefully keeping them separate.

I continually think, "is there a need to hide myself from the world anymore?"

I truly don't think there is.

We live in a society where marriage equality is legalized for all, a society that is growing more and more accepting with each generation. At the end of the day, could my sexuality potentially bar me from getting a job that I want? Maybe. There will always be hateful people in the world, but there is far too much love in this world and love always, always wins.

You can find Bryson Jones on Facebook, or on Instagram @Babyb1013. You can also email him at Bryson.jones13@gmail.com.