There are many words I once used to describe the nature of my relationship with Australian Rules Football — apprehension, deflation, turbulence, distance, the list goes on.

Before you ask, these feelings weren't courtesy of the club to whom I have bestowed my allegiance, even though the Richmond Tigers have continually remained one of the most beautifully frustrating constants during my life (I honestly cannot remember where I was the last time we won a final).

Instead, it was the result of the game itself, in what it embodies, who it welcomes and how its athletes are framed.

Like countless other male-dominated team sports across the globe, the AFL has traditionally privileged the heteronormative and the hyper-masculine with expectations imparted on its athletes and consequent standards to uphold.

And there have been, inevitably, flow-on effects to its fans.

It’s an environment that those on the fringes of Australian society, whether they be of a racial, gendered, religious or, in my case, sexual minority have had to weather if we desire to engage with the sport.

It’s an environment where, according to the recent Out on the Fields study, its stands are considered one of the most homophobic institutions of our society.

I should know. I’ve been attending AFL games since I was a whippersnapper.

My dad, a staunch Richmond supporter himself, was the one who introduced me to my first match at the Melbourne Cricket Ground way back in the early 2000’s. I was a late convert, much unlike my peers, who embraced Aussie Rules from the moment they could walk. That should have been the first warning sign that the game would struggle to love me back.

Almost immediately, I always associated spectatorship at any AFL game with a ferocity that only can be described as animalistic. It was scary, as a per-pubescent kid, being towered over by yet another anonymous supporter foaming at the mouth, spitting venom in supposed support of their team.

And at least once a game, I would always hear something along the lines of "You’re a p*****r", "Stop taking it up the a**," "Don’t act like a princess." (not only homophobic but sexist, mind) 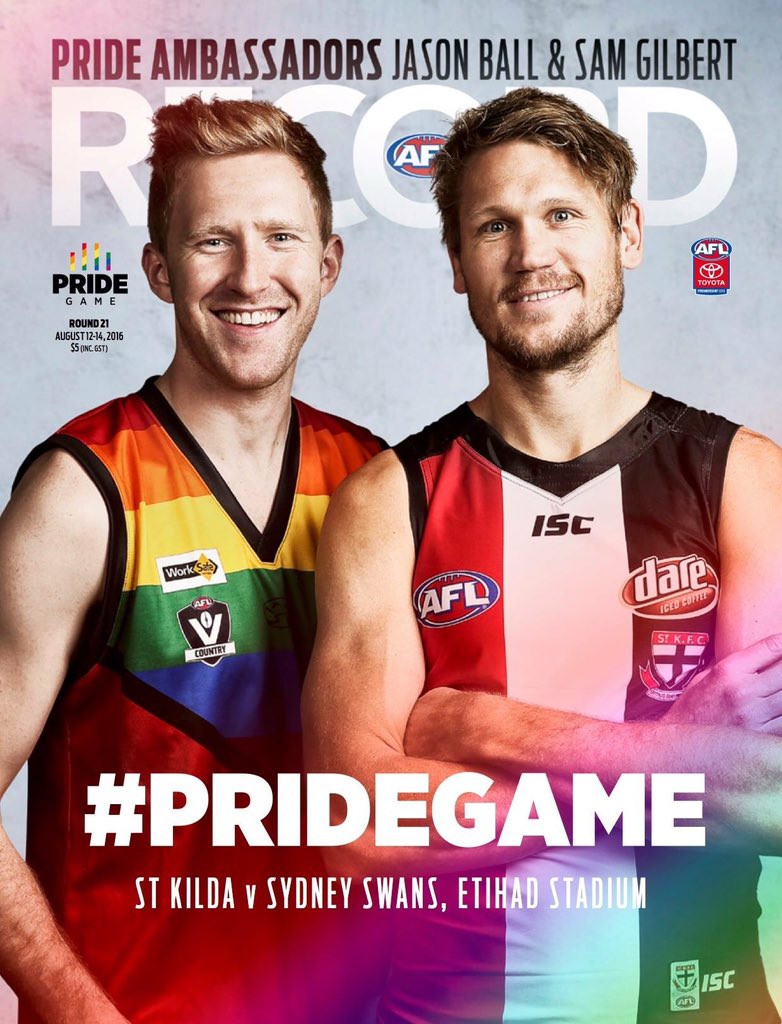 As I grew older and entered my early teens – 14 to be exact – teenagehood and all that came with it helped me begin to realise why there would always be a sense of dread as I sat down with my old man to watch our beloved Tigers.

You know, that moment of realisation that you’re somehow just a little bit different?

From there, those verbal bombshells began stinging where I was completely oblivious before. Each association of my sexuality with weakness started to weigh me down and all I could do was grit my teeth and hope it would all stop.

Eventually, that’s when I finally realized that maybe the coliseums that hold such an important place in Melbourne’s heart were not the place for me. I started attending fewer games. I felt more comfortable watching from home, knowing that I could at least be safe from any emotional harm.

However, there were moments where repeatedly replaying those comments in your head make you wonder whether society truly does accept you. Do people really think I’m abhorrent? Should I even be here, if so? Those thoughts were inescapable.

So that pent up angst, along with the intended and casual homophobia I would encounter while at high school and in everyday life, would become part of the reason I never truly accepted who I was, out of fear, until I was 21.

It was a fear I never should have had. Those who I held closest to me were immediately accepting once I came out and never batted an eyelid, let alone show any hostility towards me.

But the sense of panic that society at large would not accept me influenced my thoughts on whether my friends and family would accept me and I’m sure I’m not alone in saying that.

I have since started heading back to watch footy with friends and my old man from time to time, and slowly yet surely, it’s clear that there has been some cultural shift in the bleachers. Not a universal one as there’s still the odd homophobic comment uttered, but a shift nonetheless.

This is what makes moves like today’s inaugural AFL Pride Game so important to the LGBTI community, to highlight that the AFL is gradually becoming another inclusive space in our society.

Opponents to the event, including commentators in the media along with your standard online ‘experts’, many of whom are cisgendered, heterosexual men, complain that this is another infiltration of the gay agenda, that this should be nobody’s business and that the AFL should not be politicised.

But here’s a newsflash: this is not about you, it never has been and by suggesting AFL is not an avenue for progressing society is not only harmful but you are ignoring how influential sport has been throughout the course of history.

Nicky Winmar for instance, the St Kilda legend who this week came out in support of his gay son, was a catalyst for starting conversations on indigenous discrimination and acceptance, unfortunately one that still is continued to this day.

With the absence of an out gay AFL player to serve as a role model to young LGBTI Australians who are afraid to come out, a Pride Game is the next best thing to serve as a message that they are loved and embraced by an increasingly tolerable society. The same can be said of any closeted players who continue to face the struggle with embracing who they are.

It’s to say to them that the anxieties they hold will eventually be met with kindness. That despite the machismo of Australian Rules Football, the constant emphasis on players’ wives and girlfriends during Brownlow Medal Night and the brashness of an increasingly smaller minority of fans, that it is acceptable to feel the way they feel.

Because any young AFL-loving Australian having to negotiate a struggle with their sexuality might not have these messages available in their daily lives. This is what makes the game so necessary in 2016.

While the match may not be the lightning rod that people are hoping will spark an AFL player to come out, I’m looking forward to the educated conversations that will result.

Whether that be in local footy clubs, around water coolers or even among those who may have traditionally been the ones to spew homophobic slurs, the positive impact is going to far outweigh any attempts to derail the discussion.

It’s funny. As a kid, let alone five or so years ago, I never would have thought I would be comfortable enough to sit down and enjoy a live AFL game with a potential partner of mine. Or to see other LGBTI families be able to enjoy a space that traditionally sought to exile us yet is now promoting inclusiveness as strongly as this.

But a hell of a lot can change in a lifetime. And this journey’s just getting started.

Matt Johnson is a journalism student from Melbourne, Australia. You can get in touch with him on Twitter @matte_johnson or via email at theminibreak@gmail.com.