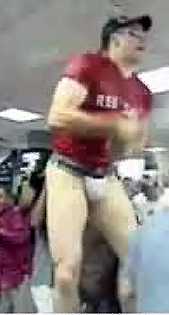 Who is the hottest Boston Red Sox? That's not me asking the question, but rather Boston's stud relief pitcher Jonathan Papelbon, last seen (right) in a jockstrap spraying champagne after the Sox swept the Colorado Rockies in the World Series.

In a series of online videos for Comcast New England, Papelbon asks various players who the hottest pitcher and position players are on the Red Sox.

"For sure, Jonathan Papelbon is by far the sexiest and hottest if I get a straight fastball belt-high," said former teammate Kevin Millar (video here), now with Baltimore. Millar added that, "for sure, Josh Beckett is the ugliest."

As for position players, Papelbon dismisses David Ortiz, saying, "If he didn't have all that money, he might not be as sexy." Millar's vote went to Mike Lowell: "You know who is very classy and kind of hot is Mike Lowell ... if you take away his Mike Dukakis eyebrows."

Lowell's vote (video here) for hottest pitcher went to Papelbon ("you should see him without his shirt on.") As for position player, Lowell picked Alex Cora, saying, "he is a little Latin flavor, straight to the point and he has those mysterious eyes."

In another segment, Papelbon discusses his "rough hands," and says he uses a hot paraffin wax to moisturize.

The videos are kind of silly but also cool in that the players seem comfortable discussing the physical merits of teammates (Papelbon really seems to get into it). The Sox appeared on "Queer Eye" a couple of years back and maybe that heightened their sensitivity. --Jim Buzinski

Hat tip to Sedition, who posted this on our message board.