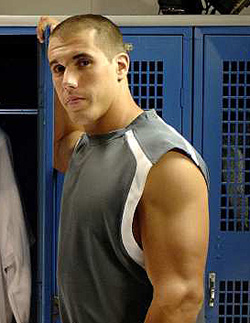 Brady Quinn has not gotten a lot of face time this season, sitting on the bench as the Cleveland Browns backup quarterback. But four lucky people can win a meeting with the hottest man in the NFL in New York as part of a Gillette promotion with Facebook.

Fans need to upload photos or videos of themselves with their "game face," which I assume to mean how fans get ready to watch their favorite games. Quinn helpfully outlines the rules in a short video on the Gillette site; there's also a behind-the-scenes video that shows him getting makeup applied and looking all lathered up. The contest ends Dec. 3, and the winner gets to take three people to meet Quinn in New York (what, a trip to Cleveland would have been considered cruel and unusual punishment?).

The rules don't state how long the winners get to hang out with Quinn or where in New York the meeting will take place, though the Eagle or Gym Bar in Chelsea would be my choice. The fine print says that Gillette is not responsible if Quinn fails to show, though I imagine that would not be good publicity for him or them. With the Browns' season ending roughly in January, the meeting will take place sometime between then and June 1, so have your camera phones ready: Deadspin will run any and all photos. Maybe it will coincide with Fleet Week. -- Jim Buzinski