Share All sharing options for: Eagles are real dogs 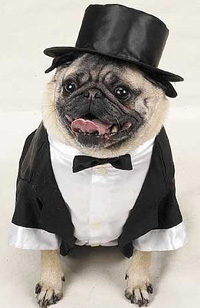 The 10-0 New England Patriots have been made 23 1/2-point favorites over the Philadelphia Eagles, the second-largest pointspread in NFL history. A spread higher than 10 points is considered major, and 23 1/2 is off the charts. (When I first posted the item, the spread was 22 points).

The pointspread is not a prediction by Las Vegas oddsmakers, but is designed to get a roughly equal number of bettors to take each side. Bookies take 10% from each bet (it's called the "vigorish" or "vig"), thereby ensuring them a profit if the bets all 50-50. The Patriots have been destroying opponents and are 9-1 against the spread this year (their four-point win against the Colts was the only time they have not covered). They beat the Bills by 46 this past week and Washington by 45 three games ago. In addition, Eagles quarterback Donovan McNabb is injured and his playing status is in question.

I asked Cyd, a huge Patriots fan, how he would bet and he hesitated before saying he would probably take the Eagles. This shows the spread is high enough to make people pause. "Nowadays, you don't see too many spreads over 16 or 17 points," Sean Van Patten, an oddsmaker at Sports Consultants in Las Vegas told ESPN. "That's because most teams take their starters out in the fourth quarter of a lopsided game. The Patriots don't. I call this phenomenon The [Coach Bill] Belichick Factor."

I would give the 23 1/2, figuring the Pats will be up at least 14 at the end of one quarter, and then pour it on well into the fourth quarter since they love running up the score. I like that the bookies and public know what the Patriots and their fans deny -- they are deliberately running up the score to humiliate opponents because they were caught cheating earlier this season. The high spread, though, could have the perverse effect of motivating the Eagles, who will certainly be told a million times what huge underdogs they are.

In 1976, the expansion Tampa Bay Bucs were 24-point dogs to Pittsburgh and lost, 42-0. In 1993, San Francisco was a 23-point favorite over Cincinnati and won, 21-8. I would love to know how readers would bet; feel free to make your pick in the message area. --Jim Buzinski