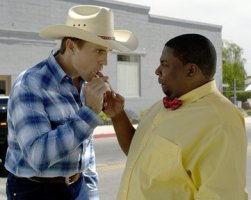 Sports Out Loud this month has a story about former NFL bad boy Bill Romanowski, who plays a gay cowboy in the unreleased movie Wieners (whether it will ever be released is a 50-50 proposition). Says Romo in the interview: "I'm driving my pick-up truck and I get stopped by Kenan [Thompson] on the side of the road. I end up grabbing his finger and sticking it in [my] mouth."

Another little tidbit from the interview. Romo, who has admitted to taking HGH during his NFL career, says, "I didn't really know what it was as the time."

Hopefully he plays gay better than he tries to dismiss his drug-taking. -Cyd Zeigler jr