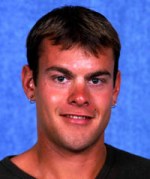 One of the United States' top distance runners died just under six miles into the Olympic trials in Manhattan, the day before the New York City Marathon. Ryan Shay has been one of the top distance prospects for years according to the AP, missing the Olympics in 2004 due to an injury before the trials.

It's gotta give the thousands of NYC Marathon runners tomorrow something to think about; if a seasoned 28-year-old runner can die in the middle of a race.... I wonder how many will bow out of the marathon after this news. -Cyd Zeigler jr.