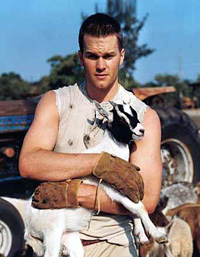 “I kind of like being a bad guy. If people want to think of us that way, I like it. We’re kind of like rogues.” -- New England Patriots quarterback Tom Brady.

This is one of the funniest things I've seen in a while. A guy who models for Stetson, Movado watches and GQ is anything but a rogue. A guy whose girlfriend supposedly called him a "wuss" can't possibly be a rogue. A guy who poses with a baby goat is many things, but a rogue is not one of them. Bill Belichick and Rodney Harrison as rogues? That I believe. But not Golden Boy Brady, even if he did make an ex-girlfriend pregnant.

People need to play to type and Brady is no one's version of the bad guy, even if a lot of NFL fans hate his team ("Evil does it" was the New York Post's headline after the Patriots beat the Colts on Sunday, next to a photo of Belichick). Brady's pronouncement reminds me of the classic "Seinfeld" episode where George was wooing a girl by pretending to be the bad boy; hilarity ensued. --Jim Buzinski