Share All sharing options for: Flutie now a redhead 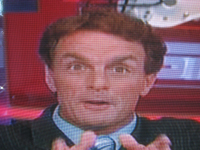 Doug Flutie won a Heisman Trophy. He played for over a dozen years in the NFL and CFL. Now, the player I once dubbed "The Chump" is bringing new meaning to that nickname with a dye job that makes Britney Spears' chop job look like the work of Vidal Sassoon. You'd think after 21 years in the pros he'd be able to afford some styling down in SoHo; I've just got to assume he can do better than the Supercuts in Bristol. -Cyd Zeigler jr.