Share All sharing options for: Singletary's pep talk: Look at my ass, literally 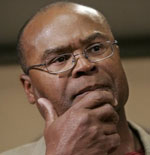 New San Francisco 49ers coach Mike Singletary became a media hit after dressing down his team following its drubbing by Seattle in his coaching debut. The former Bears linebacker, though, apparently used a visual aid to illustrate how his team got its ass kicked. From Dan Bickley of the Arizona Republic:

At halftime of that game, Singletary called for the attention of his players. He then dropped his pants, turned around and pointed to his backside. He used this occasion and that visual to describe what happened to his team in the first half.

A NFL source inside the room confirmed the story with my radio partner, XTRA 910 football guru Mike Jurecki, and added that Singletary then addressed the team for 3-4 minutes with his pants around his ankles.

Update: Singletary confirms he did drop his pants, but ESPN said he had on boxers underneath.

"I used my pants to illustrate that we were getting our tails whipped on Sunday and how humiliating that should feel for all of us." Singletary said. " I needed to do something to dramatize my point; there were other ways I could have done it but I think this got the message across."