Share All sharing options for: F.A.G.S to play for L.A. dodgeball title

A group of FAGS will play for their league championship Monday in the Los Angeles Dodgeball Society. The Fun Active Gentleman's Society is a group of 20 openly gay guys who play in the UpHigh/Down/Low league in L.A.'s Silverlake area. Wrote the Gay List Daily:

The F.A.G.S. are a force to be reckoned with in the sport. Naturally, they are the best dressed on the court, yet their prowess intimidates their competitors.After an intense recent game, we heard something never dreamed of on childhood dodgeball courts worldwide: "F.A.G.S. kick ass!"

The F.A.G.S are as diverse as Silver Lake, with players who are "jocks, drag queens, negative and positive, hipsters, nerds and artists," wrote one fan to Outsports. They went 9-1-1 this season and face the top-seed Bandana Rama in the final. At a recent game, the F.A.G.S had the crowd chanting "No on Prop. 8!" during the game.

"This has been an eye-opening experience to face such discrimination with the passing of Prop 8. Many of our team members feel that our drive to win in the upcoming championship game is analogous to the larger struggle to repeal Prop 8. If we can bring attention to this issue through our team, then we are contributing to the greater good," says co-captain Jack Connolly.

The championship will take place at Staples Center Monday night after the end of the Clippers' NBA game. Tickets are $15, and include admission to the Clippers-Spurs game beforehand.

Dodgeball has become hot in L.A. and I know guys I play football with who are big dodgeball players. The F.A.G.S play the "Stay Puft" version of dodgeball, somewhat less hardcore. "Games are played with 'no-sting' rubber balls by folks of all levels who can be as fearless as they want to be without having to worry about the messy bruising," the L.A. dodgeball site says.

At the other end is the Charles Bronson version. "Games are played with old school 8.5-inch rubber playground balls. ... The balls sometimes sting and the shots to the privates are far less forgiving." I would definitely be in the Stay Puft camp, since being pummeled by hard rubber balls is not my idea of fun. 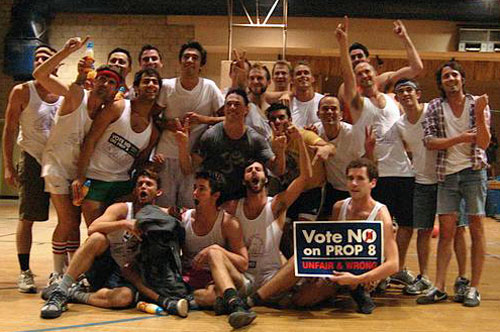