Another BCS mess in college football

Share All sharing options for: Another BCS mess in college football 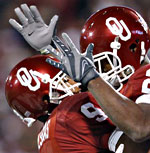 With Texas Tech being embarrassed on national TV at Oklahoma, 65-21, we will once again have a college football championship game in January that is not a legitimate title game. Same old, same old.

Tech's loss means that there were almost certainly not be two unbeaten teams playing for the title. Alabama (11-0) will be in the BCS final if it wins its final two. But two other unbeatens -- Utah and Boise State -- have zero chance because they are not considered to play in "power" conferences; too bad for them, but that's the screwiness of major college football, the only sport in the world that uses polls and computers to decide who plays for its championship.

Right now, there are six Top 10 teams with one loss -- Florida, Texas, Oklahoma, USC, Penn State and Texas Tech. Throw in Alabama, Utah and Boise State, and there are nine teams with a legitimate claim to play for the title. The system, though, favors major conferences and glamor teams and a heavy dose of perception. Perception (and an SEC bias) is why USC, a loser at Oregon State, is considered "inferior" to a Florida team that lost at home to Ole Miss. Is Florida better than USC? Nobody knows, but if Florida wins its final two games, the Gators will likely get one BCS final slot, despite what USC does.

The situation is just as weird in the Big 12. Oklahoma beat Texas Tech, which beat Texas, which beat Oklahoma. All three teams can still win the conference title (it's complicated), so we could have one-loss Oklahoma (that looks unstoppable) shut out of the title game. Right now, it's possible that the best bowl game won't be the title game in the Orange Bowl. If things fall the right way, USC vs. Oklahoma in the Fiesta Bowl could be the one most fans look forward to.

The BCS is an absurd system that the vast majority of college football fans want abolished (only 16% in a recent survey want to keep it). But given the power of the bowls and TV, peace in the Middle East will happen before a playoff system. This is one more reason the NFL kicks college football's ass. A BCS system in the NFL would have eliminated the 2005 Steelers, 2006 Colts and 2007 Giants from Super Bowl consideration well before the final two were chosen. How novel, deciding a champion on the field, not on a spreadsheet.