Proof that not all NFL players wear cups

Share All sharing options for: Proof that not all NFL players wear cups 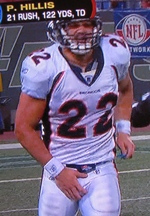 I was surprised to learn a few weeks ago from a former NFL player that not all guys in elite football wear cups, and that in fact there are many who don't. I found my proof watching the Broncos-Jets game on Sunday. Capping off his career day, Denver RB Peyton Hillis reached down and grabbed his crotch after a run. Then he grimmaced. And grabbed it again. I mean, GRABBED it. And the cameras were rolling as Rich Gannon talked about how Hillis looked "hurt." Um, yeah, I'd say. He jogged over to the sideline, all the while holding his family jewels, then fell to his knees when he finally got to the sideline.

So why don't these guys wear cups? Something about it restricting their ability to run and cut. Can you imagine the injury report on this one? "Kneed to the balls. Return questionable."