Another NBA player for gay marriage

Share All sharing options for: Another NBA player for gay marriage 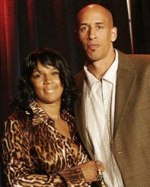 Despite the passing of Prop. 8 in California, it's still nice to see how many prominent people were against it. Add former NBA player Doug Christie to the list. The guard, who played in California with the NBA's Clippers and Kings, and his wife had hoped to celebrate their 14th wedding anniversary next July with 100 same-sex couples.

"We are living in a generation where no man or woman should be told who they can marry," Jackie Christie comments. "Everyone should be able to love freely, and my husband and I stand strongly behind voting NO on Proposition 8."

Maybe they'll get to celebrate their 20th with the gays. Or, since he played for the Knicks, maybe their 15th in New York.