The shot heard 'round Manhattan

Share All sharing options for: The shot heard 'round Manhattan 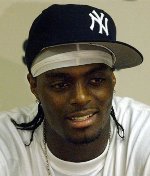 My partner was asking me this morning, "How can anyone be so stupid?" It's a great question, as details of the weekend escapades of New York Giants receiver Plaxico Burress come to light. In case you hadn't heard, the fool (allegedly) took a gun to a Manhattan club and (allegedly) accidentally shot himself in the leg. Oh, and he (allegedly) doesn't have a license to carry a concealed weapon. Oh, and he (allegedly) had dragged teammate Antonio Pierce with him.

But oh, it gets better. The tabloids are humming today with accusations that he got the club and the hospital where he (allegedly) was treated to not report the gun shot. Not reporting a gun-shot wound is also a crime. And I say he was allegedly treated at Cornell hospital because, despite workers there saying the recognized him, an official spokesperson for the hospital is denying he was there.

So what does the future hold for Burress after he is charged today? Well, his season must be over. He's got to recover from a bullet to his leg just to be healthy enough to get on the field. Then he'd face a front office that is already tired of his antics (he had been suspended from their game this weekend by the team before he shot himself). Then he'd face a League suspension that, I'd guess, would be four to eight games; (allegedly) illegally carrying a gun into a club and then (allegedly) trying to get the hospital and club to cover it up? Guaranteed suspension. And, I have to believe, he won't be a Giant next season. Looking into my crystal ball, I see ... I see ... I see Plax wearing silver and black next year.

Not that the Giants will miss him. They won a huge game against the Redskins without him on Sunday.