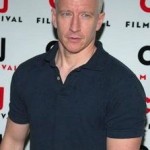 That Anderson Cooper, the newly muscular and somewhat openly closeted CNN anchor and "60 Minutes" contributor, would get topped by an Olympic athlete isn't much of a surprise. But that it was Michael Phelps and it unfolded on TV last night in a pool with both in bathing suits and shirtless, provided a nice perk to CBS' aging and often stodgy newsmagazine.

Cooper interviewed Phelps for a lengthy profile that aired Sunday, a nice sports-oriented package to draw in the NFL fans who just finished watching the late game. The piece provided the first indepth look at Phelps since Beijing and provided a few insights -- having to dig deep to win his seventh gold medal, how Milorad Cavic's mistake in the 100-meter butterfly allowed him to tie Mark Spitz, turning down a $5 million endorsement deal and buying a $1.5 million condo in hometown Baltimore.

Phelps returns to the pool and his fulltime training regime in January, but he did don a skimpy suit to meet a challenge by Cooper to race a length in the pool. Cooper also went shirtless but wore a more conservative suit before Phelps easily outpaced him without even using his arms. The two side-by-side, shirtless and muscular, added a nice bit of eye candy to an interesting profile of Phelps.

Cooper may not be an Olympic swimmer, but he looks pretty good shirtless, even with his hairless chest.