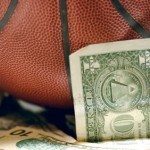 Now this recession thing is getting serious. The NFL announced it's cutting staff, joining a recent announcement by the NBA that it's firing folks, too. When a sour economy starts to impact the sports world, a place we go to escape the travails of the world spinning out of control around us, it's time for some intervention. Forget naming a car czar and bailing out the Big Three in Detroit. I want a rescue plan for pro sports.

The NFL is slashing 150 jobs, about 14 percent of its staff, to save an estimated $50 million. The NBA has announced it's cutting about 80 employees.

"These are difficult and painful steps, but they are necessary in the current economic environment," [NFL Commissioner Roger| Goodell said Tuesday in a memo to his staff. "I would like to be able to report that we are immune to the troubles around us, but we are not."

This comes on the heels of the WNBA's struggles in Houston. The league wasn't able to interest a new ownership group for the Comets, arguably the best women's basketball franchise ever. So it closed the team and sent its players packing in a dispersal draft on Monday.

WNBA President Donna Orender has been in steep spin control since.

"I think we have very responsible owners who are very focused on running quality businesses," she said. "I think that everyone here understands that there's a history here that predates this economic crisis that created extremely tough challenges for the future success of the Comets and unfortunately we weren't able to overcome them."

Worse yet, the cuts by the pro leagues portends more serious problems lower down the food chain.

David Carter, who teaches sports-business classes at the University of Southern California, said the NFL's troubles show just how widespread the damage from the economic crisis has become.

"If it can happen at the NFL level, imagine the retrenching that is going to have to go on in the secondary sports leagues," Mr. Carter said. "The belt-tightening is universal."