TO hits back at two ex-Cowboys

Share All sharing options for: TO hits back at two ex-Cowboys 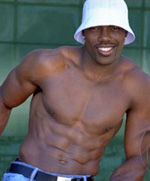 After ex-Cowboys Emmitt Smith and Keyshawn Johnson were critical on ESPN of the present-day Cowboys, Terrell Owens take a swipe back. And what a pointed, witty, smart swipe it was. From the Dallas Morning News:

"Those two need their own show - Dumb and Dumber," said T.O., who was otherwise jolly while sporting a Cowboys-customized Santa cap and blinking red nose.

T.O. called Emmitt a hypocrite for publicly calling the Cowboys a bunch of individuals, then leaving a message on Greg Ellis' cell phone to pass onto the team. (T.O. wouldn't say what the message was.) T.O. also pointed out that Emmitt doesn't even know the name of the rookie running back who starred against the Steelers, since No. 22 apparently referred to Tashard Choice as Rashard.

Owens is, to me, a big distraction for any team he plays for, but good for him sticking up for his team and his teammates. There's nothing worse in sports broadcasting than former athletes who just player 'hater' on TV.