Share All sharing options for: Bragman's new book comes out 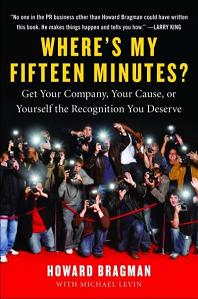 Longtime Outsports friend and PR maven Howard Bragman is releasing a new book that is fun, conversational, enlightening and sure to be a must-read for anyone looking for a little fame and some great insights into PR. "Where's My Fifteen Minutes?" is the work of a man who has handled dire PR nightmares with grace and who has helped many people, including Esera Tuaolo, John Amaechi, Rosie Jones, and yes, Sheryl Swoopes, come out. From the book...

The gay community itself doesn't always make it easy for those who come out. Sheryl Swoopes, the great WNBA star, was the first pro athlete to come out at the peak of her career since Olympic diving medalist Greg Louganis. When I met Sheryl, she was quite upset because she was facing enormous disapproval from the power brokers in the lesbian community. Sheryl wasn't buying the party line, and she was telling the world that her decision to become a lesbian was a choice. She had been married to a man, and that experience wasn't satisfying, and therefore she had made the decision. That's not the image the community wanted to project about itself.

Sheryl told me, "I know I'm supposed to say what they want me to say, but that's not my truth." I told her that she had the right to tell her story without shaping it to the popular political will. The gay/lesbian community was not happy. Swoopes received tremendous press. She was everywhere. But I think that's a measure of freedom - it's important to be able to come out on your own terms and not terms dictated by the powers-that-be in the gay and lesbian community.

The book's subtitled "Get your company, your cause, or yourself the recognition you deserve." And if you're looking for your 15 minutes, you really out to get the book. Bragman is at the top of his game and knows the PR industry inside and out. I have seen him give incredible advice to people, and I have been the recipient of sage advice from him. Much of what's in his head is in this book. Check it out.