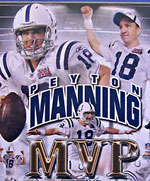 The Indianapolis Colts, who haven't done anything the easy way this season, spotted the Jacksonville Jaguars 14 points before rallying to win, 31-24, to clinch a playoff spot in the AFC. It was the Colts' eighth straight win after starting the season 3-4.

The Colts have been ridiculous at coming back this year. They have won eight games by seven or fewer points. Four times they have been down double digits on the road and won (that has to be an NFL record), and they tied an NFL record by overcoming three 14+ deficits to win a game; they might not be the best team in the league, but they certainly are the most fun to watch.

They beat the Jags for one reason: Peyton Manning. He was almost perfect, going 29 for 34 for 364 yards and three touchdowns. All this despite the Colts running only 52 plays (their defense sucked for three quarters) and having a running game that gained a whopping 32 yards.

The Colts will be a tough out in the playoffs. Having watched virtually every one of their plays this season, they are resourceful and talented enough to win the Super Bowl. But their inability to run and play consistent defense could also make them one and done.

Manning is my vote for league MVP. In the eight-game stretch he has 16 TDs and only three interceptions. He has carried a flawed team on his back with clutch play and without him the 11-4 Colts would be lucky to be 5-10. There is no other QB who should even be close. I could accept Minnesota's Adrian Peterson or Pittsburgh's James Harrison also getting the MVP nod, but that's about it. If you were an MVP voter, who would you pick over No. 18?