Hoops madness and the Baller in Chief

Share All sharing options for: Hoops madness and the Baller in Chief 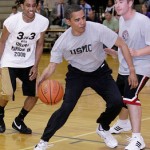 No offense to bowlers, but a real sport is about to enter the White House. With a new Baller in Chief in Barack Obama about to take up residence in the White House, basketball is poised to become the FIrst Sport. The NBA, of course, stands ready to rip out the bowling lane and install a regulation court. Hoops madness has returned to D.C. and it has nothing to do with the Wizards.

Mr. Obama -- whose jump shot earned him the nickname Barry O'Bomber at Hawaii's Punahou School -- has hired a team of cabinet members and aides with serious basketball backgrounds. Many of them are planning for regular court time with the president, according to Mr. Obama's transition press team.

"I think we are putting together the best basketball-playing cabinet in American history," the president-elect said at a news conference earlier this week.

The NBA wants to move right in, offering their services to install a regulation court at the White House. Bowlers, though, aren't being elbowed out just yet. Top bowling associations are offering to refurbish the lane, first built in 1969, with a state-of-the-art scoring system, high-tech bowling balls (huh?) and a digital surround-sound system (photo).

"It would be a sad, sad day" if Mr. Obama scrapped the bowling lane, says Jim Sturm, president of the Bowling Proprietors' Association of America and owner of two bowling centers in Charleston, W.Va. "I think his political analysts ought to take a long look at removing [it]. It could have a long-term impact on his political prospects."

The Wizards, by the way, are hungry to get anyone to pay attention to them and hope they can lure Obama's stardom to their struggling franchise.

Abe Pollin, owner of the NBA's Washington Wizards, has extended an open invitation to Mr. Obama to sit in on team practices, attend Wizards games in the owner's box and play pickup ball at the Verizon Center with Mr. Obama's circle of regulars or with team members. "Our players would love to shoot around a little bit with him," says Wizards spokesman Matt Williams.

The NBA, struggling in the economy along with other pro sports leagues, might just be angling to get the Baller in Chief to loosen up the federal pursestrings. It's time for their federal bailout, after all.