Share All sharing options for: Is Avery suspension warranted? 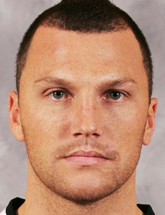 The National Hockey League has suspended Dallas Stars forward Sean Avery indefinitely. Avery has been blogged about a number of times here for both his on-ice antics (causing a rule change during the playoffs by waving his stick near the face of a goalie) and off-ice interests (interning at Vogue magazine).

The reason for the suspension, though, has nothing to do with anything he did on the ice. The Stars are in Calgary for a game tonight against the Flames. After their morning skate, Avery went over to reporters waiting to speak to him about a recent comment he made on ESPN about Flames star Jarome Iginla. Avery said that the league should improve its marketing by promoting its "villains" and added, "Nobody cares about Jarome Iginla and guys like that, they’re just not exciting enough.”

In the locker room today, Avery made this statement: "I am really happy to be back in Calgary, I love Canada...I just want to comment on how it's become like a common thing in the NHL for guys to fall in love with my sloppy seconds. I don't know what that's about. Enjoy the game tonight."

It's a reference to Flames defenseman Dion Phaneuf, who is currently dating actress Elisha Cuthbert, who used to date Avery (and also has been linked to Montreal's Mike Komisarek). In addition, another Avery ex, model and actress Rachel Hunter, is now dating Jarrett Stoll of the Los Angeles Kings.

It's a crude and obnoxious remark, for sure. But is it something that warrants a suspension? And did the NHL take this action because the Stars and Flames are playing tonight and wanted to avoid a potentially ugly situation?

This is a league that is so concerned with preventing fighting but still can't figure out how to crack down on blows to the head that sometimes cause concussions, which would seem to me to be much more important. This suspension seems way over the top.