The Grinch wears black and gold

Share All sharing options for: The Grinch wears black and gold 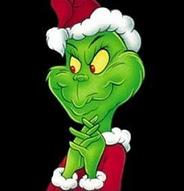 Every Christmas for the last few years, a reporter in Pittsburgh has dressed up like Santa Claus and caused a stir at a Pittsburgh Steelers press conference. Coach Bill Cowher played along with it for years. Last year, Mike Tomlin did, too. But this year, Grinch Tomlin wasn't having it, reportedly sighing throughout the ordeal and ultimately sending Santa on his way for good: The Steelers have said they will not allow it in the future.

His team's in the playoffs, they're playing well, they need one home win to go to the AFC Championship, and he's whining about a cute little tradition involving Santa Claus? Sounds like he needs to apply for the soon-to-be-vacant Eagles head coaching position. Sorry, but your pre-meaningless-game press conferences are simply not that important, Mikey. The Steelers fans I know are all fun-loving people with a great sense of humor. Too bad their coach isn't.