Tel Aviv shows some love for its gay jocks

Share All sharing options for: Tel Aviv shows some love for its gay jocks 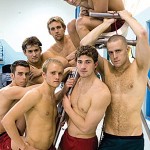 Tel Aviv is feeling that gay spirit. The Israeli city is assembling a team of gay jocks, apparently the first of its kind in the country, for the World Outgames next July in Copenhagen. Team organizers want 30 athletes and city officials are studying how much of the tab they will pay to have the team compete. When might we see that sort of proactive support from a U.S. city?