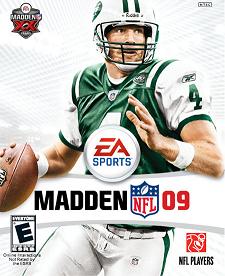 Oh cruel, cruel fate. The Madden Curse had doomed the cover boy of EA's Madden football video game since 1999 when Garrison Hearst was on the cover and broke his leg in the playoffs that year. Every year since, the player on the cover of that game has had his numbers or his team's success drop off the next year, sometimes dramatically or with serious injury.

It seemed this season, after 11 games, that the curse would be broken with Brett Favre, whose team was 8-3 and talked about as the team to beat in the AFC. And then the curse struck. Favre's Jets went 1-4 over the next five games and they missed the playoffs by two full games. In that time he threw 2 TDs and 7 INTs, he completed fewer than 60% of his passes, his QB rating was a miserable 59.96, and he was arguably the biggest reason the Jets collapsed in the last five games. And he led the League in interceptions with 22; no one else had more than 18. He was so bad that his coach, Eric Mangini, was fired this morning by the New York Jets.

This season the curse was so bad that any team that courted Favre or had him on their roster this year felt the curse. The Packers were a pitiful 6-10, losing five of their last six games. The Buccaneers, whom Favre almost went to, just needed to win one of their last four games to get into the playoffs, two of them home against teams with losing records; They couldn't get it done.

And, of course, the team whose quarterback Favre kicked out of New York, the Dolphins, tied for the biggest win-loss turnaround in NFL history (from 1-15 to 11-5), won their division for the first time in almost a decade, and beat Favre in Week 17.

Who would allow themselves to be on the cover next year? Thank heavens it won't be a Patriot!