Share All sharing options for: USC, UCLA show NCAA what class is 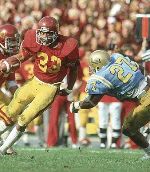 It is great to hear about the cooperation being exhibited this week between USC football coach Pete Carroll and UCLA's Rick Neuheisel, and how they gave the big middle finger to the NCAA. For years, both USC and UCLA wore their dark home jerseys in their annual end-of-season rivalry game. But the big, mean NCAA decided years ago that any visiting team in college football MUST wear white, or that team forfeits a timeout in each half. To return to that tradition, Carroll announced on Monday that USC would wear their home cardinal jerseys for the game at the Rose Bowl.

Well, the two coaches have decided to screw the NCAA. To make the game fair, UCLA will burn a timeout at the start of the halves to make the game even; And next year, USC will do the same and have invited UCLA to wear their home jerseys as well.

The NCAA Football Rules Committee decided, from their perch on high, to only take away one of USC's timeouts. So now, at the beginning of the game, there will be a hullabaloo as USC is assessed a penalty, and then UCLA calls a timeout at the beginning of the game. A classy move for the two schools, and a bullshit move by the NCAA. It'll be great to see the USC fans rise to their feet and cheer for UCLA when they call their early timeout.

Figures. The NCAA wants to penalize teams for sticking to a tradition that is pretty cool and hurts no one, but wants to adhere to a bullshit tradition (the BCS and Bowl system) that hurts many.