Share All sharing options for: Out rugby referee writes autobiography 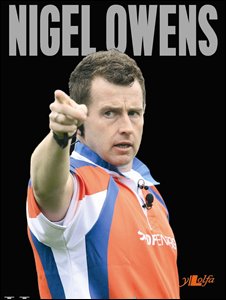 Nigel Owens, the openly gay rugby referee, is releasing a new autobiography that reportedly reveals his fears of coming out and much of the support he's experienced since doing so. He offered a great interview to the BBC in which, among other things, he talks about trying to kill himself before coming out. He's now glad he did come out in part because of the effect it's had on other people:

"When you do a book, especially an autobiography, you've got to be honest about stuff," Owens told BBC Wales. I had an e-mail from a young guy off Facebook who had gone through the same thing I had gone through - he was gay and could not tell his parents. But they found out through television that I was gay and their attitude towards gay people had changed. He felt more comfortable that he could tell them so he did so and was accepted pretty well."

You can also find Owens on Facebook through a quick search of his name.