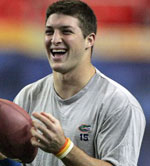 I won't spend much time ranting about what a joke the Bowl Championship Series is, since the vast majority of fans would prefer a playoff and one won't be coming for years. So we are left with another "championship" game that will not satisfy a large percentage of fans. If predictions hold, Florida and Oklahoma will play in the Orange Bowl Jan. 8 for the BCS title.

Florida, behind superstud Tim Tebow (photo), beat Alabama, 31-20, to win the SEC title, while Oklahoma crushed Missouri, 62-21, to win the Big XII. It was very low-class for the Sooners to be throwing deep with starting QB Sam Bradford still in the game with a 34-point lead and four minutes left in an attempt to set a scoring record. Bradford then sounded like a sore winner with his garbage "we got no respect" post-game comments on ABC; I'll be pulling for the Gators. With both Florida and Oklahoma having one regular-season loss, we have yet another unsatisfying end to the college football season.

Think Texas fans will recognize OU as champs if the Sooners beat Florida? Forget it, since Texas beat OU by 10 on a neutral field. And will someone please explain why Florida's home loss to Mississippi is somehow "better" than USC's sole loss at Oregon State or Penn State's last-play loss at Iowa? And don't forget unbeaten Utah and Boise State, who are totally left out of the conversation.

If you were the czar of college football and had to make the choice, what two teams would you pick to play in the BCS final? I would take Texas vs. USC. The Longhorns are a dropped interception away (at Texas Tech) from being unbeaten (I assume they would have beaten Missouri on Saturday), while USC has the best defense in college football and played one bad quarter this season. I would love to see what others think, and why -- our matchups would be no less legit than what the BCS spews out.