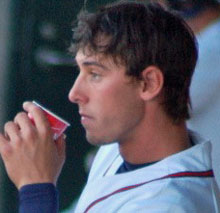 Jordan Schafer is writing the newest chapter in “Baseball for Dummies: Professional Edition.” The unfolding saga swirling around him will be summed up with his personal story, titled “How to Kill a Baseball Career.”

Schafer, the No. 1 prospect for the Atlanta Braves despite not playing above Class A until this year, was suspended this week for 50 games. Major League Baseball said it linked him to human growth hormone (HGH), which is banned in the sport. Before this week, he had a Nike contract and was nearly guaranteed the center field spot on the roster next year.

Now the 21-year-old has changed his cell phone number, refused to talk publicly about the accusations and sent his father out to make excuses. The Atlanta Journal-Constitution detailed the latest developments today:

Schafer’s father implies that MLB’s got it all wrong, that his son never juiced and that this is all just a bad misunderstanding. Yet, he and his son won’t directly address the troubling allegations. In the world of public opinion and cheating in pro sports, no defense is an admission. Hopefully, the future star with the cover boy looks will figure this out. Time to man up and speak out. --Matt Hennie